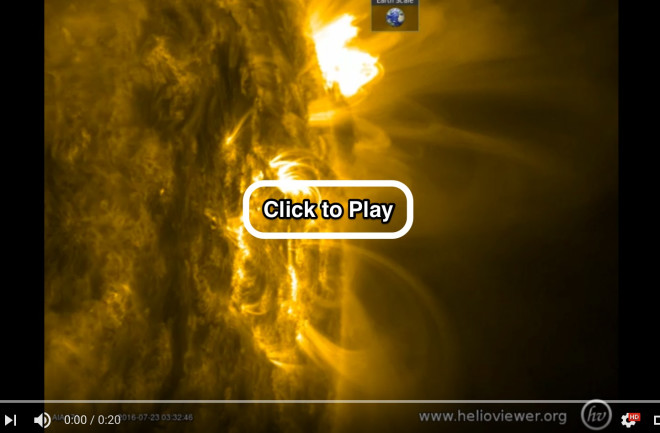 NASA's Solar Dynamics Observatory spacecraft captured this view of a solar flare and coronal mass ejection, or CME, on July 23, 2016. Click to watch the video on Youtube. (Source: NASA, ESA and JAXA. Images and movies created using the ESA and NASA funded Helioviewer Project: http://helioviewer.org/) A buildup of intensely tangled magnetic energy on the Sun suddenly let go two days ago, unleashing a massive explosion of radiation and super-hot plasma. The radiation explosion was the most powerful solar flare of 2016 so far. You can watch all the action close up in the video above, based on data from NASA's Solar Dynamics Observatory spacecraft, or SDO. When the video starts, keep your eye on the bright active region toward the middle of the frame. It's seething with energy. Above and around it, glowing, electrified plasma flows along curved lines of magnetic field, creating huge structures known as coronal loops. And then there is an extremely intense bright flash — the solar flare. This is a sudden blast of radiation traveling at the speed of light. The flare is accompanied by a titanic splurt (technical term) of solar material called a coronal mass ejection, or CME. An analogy (albeit imperfect) is a blast from a cannon. The bright flash from the muzzle is akin to the solar flare, and the artillery shell exploding out of the barrel of the cannon is like the CME. Here's a view in the extreme ultraviolet part of the electromagnetic spectrum (94 Angstroms):

A M7.6-class solar flare is seen here in the extreme ultraviolet part of the electromagnetic spectrum in a video captured by NASA's Solar Dynamics Observatory spacecraft on July 23, 2016. (Source: NASA, ESA and JAXA. Images and movies created using the ESA and NASA funded Helioviewer Project: http://helioviewer.org/) Viewing the Sun at this wavelength is particularly useful for monitoring flaring activity. An almost unimaginable release of energy is dramatized well in this view. As a fascinating aside, recent research suggests that energetic particles from fusillades of solar flares far bigger than what we see today led to the formation of organic molecules in the early Earth's atmosphere. And these compounds, in turn, could have provided the seeds for the origin of life. Moreover, the flares could have warmed Earth enough for life to take hold. Today, solar flares and CMEs are much smaller. But they do pose risks to satellites, astronauts on the space station, telecommunications systems, and the electrical grid. Luckily, the July 23rd flare and CME were not directed at Earth. And even if they had been, the event was not terribly large. The flare was designated as a M7.6 event. Below it in strength are A, B and C classes. There is a tenfold increase in energy with each one. The most powerful events are X-class flares. That's 10 times stronger than an M flare. The LASCO instrument aboard the Solar and Heliospheric Observatory spacecraft, or SOHO, also witnessed the fireworks on July 23rd. LASCO consists of three telescopes that employ a solid disk, called an "occulter," to cover up the Sun. This blocks direct sunlight, thereby allowing the Sun's dimmer corona — it's extended atmosphere — to be seen. https://www.youtube.com/watch?v=zyvk_AVRkwY&feature=youtu.be LASCO's coronagraph also can see material flying out from the Sun in a coronal mass ejection. In the video above (which loops several times) you can make out the CME that was hurled into space during the explosion on July 23rd. Okay, here one last view of the event — let's call it the 'extended cut': https://www.youtube.com/watch?v=Tu9h3yR2RKo If you're interested to see more videos of solar activity, and a host of other natural phenomena, you can poke around in my Youtube channel. Lastly, if you want to make your own videos of solar activity, check out Helioviewer's online interactive tool.