This aviator with “The Right Stuff” set records in the air and helped pave the way for NASA’s successes. 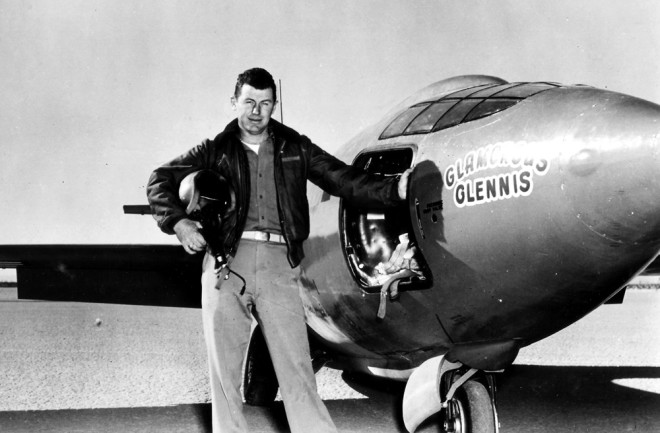 The legendary test pilot Chuck Yeager, who became the first man to fly faster than the speed of sound, died on Monday, December 7.

His wife, Victoria Yeager announced his death on Twitter: “It is w/ profound sorrow, I must tell you that my life love General Chuck Yeager passed just before 9pm ET. An incredible life well lived, America’s greatest Pilot, & a legacy of strength, adventure, & patriotism will be remembered forever.”

Yeager joined the U.S. Army Air Forces (USAAF) out of high school and became a fighter pilot in the European theater of World War II, where he was credited with downing at least 11 German planes.

After the war, he took on test pilot duties. In 1947, Yeager became the first person to travel faster than the speed of sound, flying the experimental, rocket-powered, bullet-shaped Bell X-1 airplane. The feat demonstrated that the “sound barrier” — the dramatic increase in drag and buffeting as an aircraft approaches the speed of sound — could be broken, paving the way for supersonic aviation.

At the time, the Air Force tried to maintain secrecy around the exploits of Yeager and the other pilots at the Muroc Army Air Base (now Edwards Air Force Base) in California. Yeager’s supersonic flight only become public knowledge when Aviation Week reported on it two months later.

It was Tom Wolfe’s 1979 book The Right Stuff that truly immortalized Yeager, proclaiming him to be “the most righteous of all the possessors of the right stuff.” Wolfe famously wrote that Yeager’s West Virginia drawl was the original “voice of the airline pilot… coming over the intercom,” with a “down-home calmness” that became imitated by pilots across the United States. Yeager’s fame grew further after being memorably portrayed by Sam Shepard in Philip Kaufman’s 1983 film adaptation of Wolfe’s book.

The Right Stuff also shed light on the development work that Yeager and his colleagues at Muroc did alongside pilots flying for NACA, the predecessor of NASA. Later, Yeager served as a mentor and chase pilot for those who flew the X-15, which could rocket to the edge of outer space.

On Monday, NASA administrator Jim Bridenstine paid tribute to Yeager in a statement. “Chuck's bravery and accomplishments are a testament to the enduring strength that made him a true American original, and NASA's Aeronautics work owes much to his brilliant contributions to aerospace science.”

Yeager was never considered for astronaut duty — he never had a college degree, a NASA requirement. He also had no interest in being “little more than Spam in the can, throwing the right switches on instructions from the ground,” as he later wrote in his autobiography.

And when asked in 2016 on Twitter why he didn’t become an astronaut, he gave an additional reason: “Didn't want to wipe the monkey crap off the seat before I sat down.”