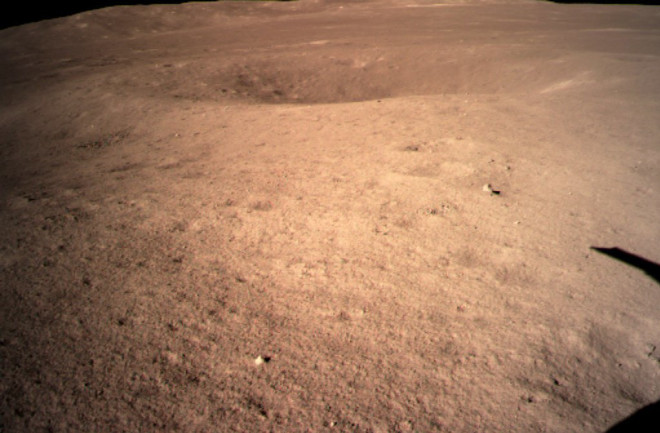 The Chang'e-4 spacecraft sent back the world's first close shot of moon's far side after making a historic soft landing. (Credit: CNSA)

For the first time in history, a spacecraft has landed on the far side of the moon. At 10:26 am, Jan. 3 Beijing time, China’s Chang’e-4 spacecraft made a successful soft landing in the Von Kármán crater within the moon’s South Pole-Aitken (SPA) basin. A few hours after the landing, the craft sent back its first close shot of the far side of the lunar surface via the relay communication satellite Queqiao, according to the state-run China Global Television Network.

The Chang’e-4 mission took off for the moon just over a month ago, and reached orbit around the satellite on December 12. The mission harbored some risk, because operators on Earth cannot directly communicate with spacecraft on the moon’s far side. Chang’e-4 communicates with Earth via a relay satellite in orbit around the moon, something that adds another level of complexity and risk, according to Jim Head, a researcher at Brown University who worked with Chinese colleagues to analyze Chang’e-4’s landing site.

The landing appears to have been accomplished without any major issues, however, and the Chinese lander and rover will be able to begin exploring the moon’s far side, an environment astronauts and spacecraft have until today only seen from afar.

The far side of the moon, because it faces away from Earth, isn’t polluted by radio “noise” from our planet. So scientists think that it could be an ideal location for radio astronomy, which works best when there are no interfering signals like we have on Earth. The spacecraft’s spectrometer, which will make radio astronomy observations, will test this idea.

Another instrument on board the spacecraft known as the Advanced Small Analyzer for Neutrals (ASAN), will measure how solar wind — a flow of charged particles from the sun — interacts with the lunar surface. The first data from this instrument is expected to be available before Feb. 11. The spacecraft also carries cameras and a radiation experiment.

There is much to explore on the far side of the moon. Researchers believe that the SPA basin that the craft landed in could have lunar mantle on the surface, brought up by an ancient collision. If so, it would give astronomers a chance to study material from the moon’s interior, something that could help them understand how it formed. Other questions about the moon’s geology, such as why the crust is thicker there could be answered with data from this mission as well.