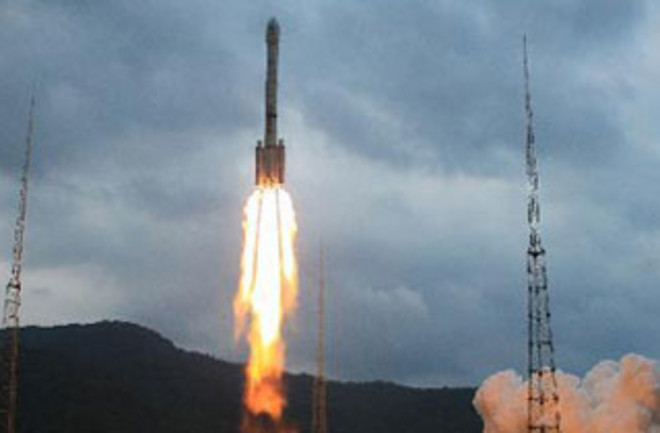 China successfully launched its second lunar probe on Friday, taking another step towards its goal of becoming a full-fledged space power. The probe, named Chang'e-2, made several maneuvers over the weekend to correct its trajectory, and is expected to reach the moon's orbit this week. The first Chang'e probe (they're named after a Chinese moon goddess) orbited the moon for 16 months before self-destructing in a controlled impact with the lunar surface. This second craft is expected to return better data, because it will orbit closer to the surface than its predecessor and carries a higher resolution camera.

Chang'e-2 will orbit 100 kilometers above the moon's surface and drop down to 15 kilometers on a mission to take detailed pictures of a candidate landing area for a follow-on craft, Chang'e-3, that is expected to be launched toward the end of 2014 or early 2015. [Science Insider]

The area of interest is known as the Bay of Rainbows

, and the head of China's lunar exploration program, Wu Weiren, says it's the top choice for a landing spot.

The geological structure in this area is diverse, so a probe there would have greater scientific value," he said. "Other places on the moon have already been landed on, so we want to choose one that has not been explored before," he said. "Previously, most lunar programs landed around the equator of the moon, an area easier for monitoring and control maneuvers, but Chang'e-3 will take on greater challenges." [Xinhua]

While Chang'e-2 seems to be coasting serenely towards the moon, things have been a little more chaotic on the ground back in China. Last night, residents of two villages in Jiangxi, China heard rocket debris crashing back to Earth.

Villagers in the area awoke last night to quite a ruckus, thinking that an earthquake was underway. Upon exploration, they instead found what appears to be a sizeable chunk of the rocket used to launch Chang’e II toward the moon in a launch on Friday. Fortunately, the debris fell harmlessly onto rural land, injuring no one and causing no property damage. Had the space junk rained down on one of China’s many densely packed population centers who knows what might have happened? [Popular Science]