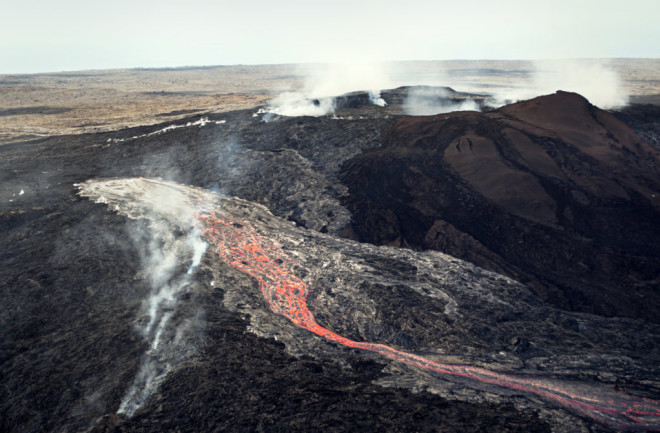 A new lava flow issues from the Puʻu ʻŌʻō on May 24, 2016.HVO/USGS We've had a lot of explosivevolcaniceruptions to discuss over the past few months, but now it's time for a couple places where lava flows dominate to take center stage. Two of the most active shield volcanoes on Earth saw some new developments last week: Kilauea on Hawai'i and Piton de la Fournaise on Reunion Island. Let's run down the action: Hawaii After some intense inflation across Kilauea's summit and a dramatic rise in the summit lava lake, new lava flows have started issuing from the Puʻu ʻŌʻō vent on the East Rift Zone. This demonstrates some of the interconnectedness of the Kilauea magmatic system, where changes in the volcano at the summit can manifest over 18 kilometers down the slopes with with new lava flows at Puʻu ʻŌʻō. The lava flows coincided with a period of strong inflation at the summit and then deflation at Puʻu ʻŌʻō. The new lava flows are all less than one kilometer long and are no threat to anyone on the island (unlike the infamous Pahoa flow). The USGS map of the new flows shows just how small they are compared to the current active lava flow field fed by the lava tube system under the East Rift. You can check out some video taken of the new flows after an overflight of the area yesterday. In it, you can see the flows flanked by growing levees. They could eventually crust completely over to form some new lava tubes. A thermal image (below) shows how the flows are confined up slope and then branched into into a lava delta when they reached flatter ground.

Thermal image of one of the new lava flows from Puʻu ʻŌʻō on the East Rift of Kilauea, seen on May 24, 2016.HVO/USGS Not to be left out, the long-term inflation persists on the Southwest Rift Zone along with deep earthquakes, suggesting that magma is lurking somewhere beneath that arm of the volcano. No signs that an eruption will happen soon, but it's still rumbling. Reunion Island Meanwhile, halfway across the world in the Indian Ocean, Piton de la Fournaise had its first eruption of 2016. This eruption is centered on the southwestern side of the volcano near the Château Fort cone. It is following the same pattern as most eruptions from the shield volcano, where a new fissure opens that has a few lava fountains that feed new lava flows. The eruption was preceded by inflation that started earlier in the month and volcanic tremor that began a few hours before the eruption, both caused by magma making its way to the surface. Check out some great images and video of the eruption! The last eruption at the remote island volcano lasted from August through October 2015. This eruption could follow that pattern, although over the last century, duration of eruptions have varied greatly.