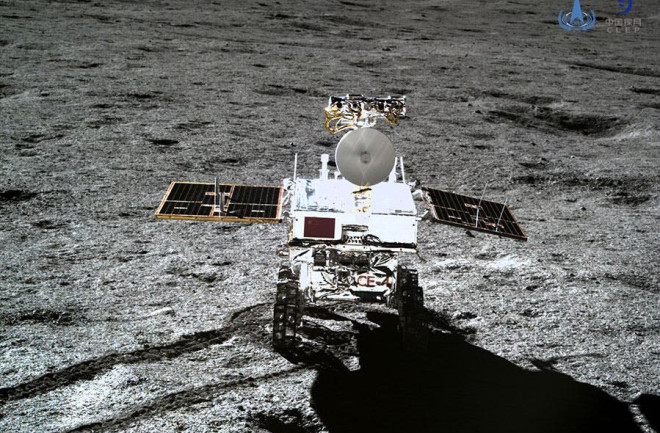 An image of China's Yutu 2 rover on the far side of the moon, an image released by Chinese space officials Friday, Jan. 11. (Credit: CNSA/CLEP)

Now, Chinese officials have released new high quality images from the craft’s first days on the moon.These images, captured by a camera aboard the Chang’e 4 lander, reveal never-before-seen details of the far side of the moon. Among the images are a panoramic view of the lunar terrain, a snapshot of the Yutu 2 rover, and a sped-up video from the craft’s descent camera showing its landing.

The video shows the craft orbiting and then descending into the Von Kármán crater which is covered in a thick layer of lunar regolith, or moon dust. The entire landing sequence lasted for about 12 minutes but the video, released by the Chinese space agency, is about two-and-a-half times faster than normal speed.

Among the first images and videos taken by the craft is an image of the Chang’e 4 lander, taken by the Yutu 2 rover. In the image, the antennas on the craft’s low-frequency radio spectrometer cast sharp shadows on the bright lunar surface.

A camera on China’s Yutu 2 lunar rover took this photo of the Chang’e 4 lander on the far side of the moon. (Credit: CNSA/CLEP)

A camera on China’s Yutu 2 lunar rover took this photo of the Chang’e 4 lander on the far side of the moon. (Credit: CNSA/CLEP)

Another video taken by the craft and posted to YouTube by the Planetary Society shows the Yutu 2 rover exploring the far side of the moon. But this rover will do more than just roll around — Yutu 2 has a ground-penetrating radar on board that allows it to study the many layers of the moon below its surface. This, along with the rover’s spectrometer, will allow it to gather data on lunar soil composition.

We’ll have to wait a little longer for more imagery and data, though. The craft is solar powered and the sun recently set on its location on the moon. We’ll have to wait a whole lunar night, or 14 days, for the sun to return and Chang’e 4 to emerge from low power mode to give us new data.