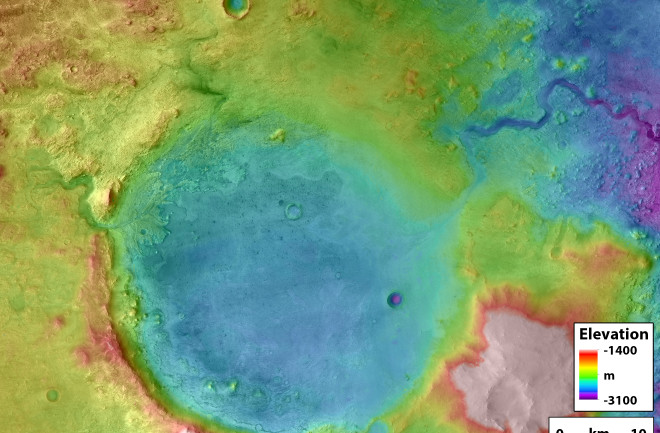 The Jezero crater is a paleolake on Mars. Its outlet canyon, carved by overflow flooding, can be seen in the upper right side of the crater. (Credit: NASA/Tim Goudge)

More than 3.5 billion years ago, water flowed freely across the surface of Mars, forming lakes and seas. New research shows how these lakes may have overflowed and burst at their sides, causing flooding so severe it carved out canyons in the Martian surface over the course of just weeks. This new research suggests that the flooding could have drastically shaped and altered the Martian landscape and, potentially, other planets that similarly lack plate tectonics, lead author and postdoctoral researcher Tim Goudge said in a statement. “These breached lakes are fairly common and some of them are quite large, some as large as the Caspian Sea. So we think this style of catastrophic overflow flooding and rapid incision of outlet canyons was probably quite important on early Mars’ surface,” Goudge said in the statement.

Today, the martian surface has over 200 paleolakes, or ancient lakes that have either shrunk or disappeared with changing conditions. Flooding from these paleolakes has left behind multiple paths carved by flowing water called outlet canyons. For over 25 years, Goudge said in an email, scientists have known about these paleolakes and outlet canyons. “These paleolakes have long provided some of the strongest evidence that Mars experienced an era when flowing liquid water modified the surface,” Goudge added. But only now, with this study, have scientists shown that these canyons were rapidly carved out by single flooding events instead of gradually formed. The researchers came to this conclusion by studying high-resolution photos of Mars taken by NASA’s Mars Reconnaissance Orbiter satellite. “By looking at the topography of the outlet canyons, we were able to show that the outlet size correlates very well with how much water would have drained from the basin during a flood, which is most consistent with their formation rapidly (in the geologic sense) through a single, large flood event,” Goudge said. The team is still working to understand just how rapid and severe these flooding events were, Goudge said. But, “some preliminary work suggests [the outlet canyons] may have formed within a matter of weeks to months," he added. Goudge also had some insight into what these catastrophic floods might have looked like: “The floods would have been very sediment-rich, possibly moving large boulders far downstream, and they may have even initiated as something that looked more like a debris flow than a typical river.”

The Palouse River Canyon in eastern Washington was carved out by catastrophic flooding during the last ice age. New research shows how flooding on Mars and Earth both sculpt the terrain in a similar way. (Credit: Keith Ewing) Massive flooding events on Earth’s have similarly shaped our landscape. When terrestrial lakes have been dammed by glaciers and their water finally broke through, it has created similar outlet canyons on our planet, the statement explained. The new research might inform future investigations that are searching for signs of past life on Mars, according to the statement. The researchers proposed that NASA’s Mars 2020 rover look for traces of past life in the Jezero Crater on Mars, as their work shows that this crater once held water for long periods of time. This work is published in the journal Geology.