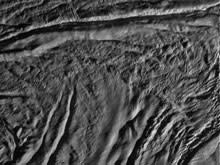 The Cassini spacecraft that has been busily exploring Saturn and its moons swooped to within 30 miles of the tiny moon Enceladus yesterday, and has already begun sending back images of the fissures near the moon's south pole. The icy moon, which is about 310 miles wide,

has tantalized scientists with geyser-like eruptions of icy water vapor that were first spotted in 2005.... The eruptions produce a halo of frozen water vapor and gas that replenishes Saturn's E-ring as Enceladus circles the planet [SPACE.com].

The Cassini took images of the fissures, which scientists call the moon's "tiger stripes," in the infrared spectrum as well, to gain further information about the temperatures in the vents; previous studies had shown temperatures there can reach a relatively balmy -135 degrees Fahrenheit, which is 200 degrees Fahrenheit warmer than the rest of the moon. While the material sprayed out of the fissures consists of frozen water vapor, scientists

disagree on whether an internal ocean of [liquid] water, life's crucial ingredient, hides within the tiny moon [USA Today].

Researchers will now begin sifting through the data that Cassini sent back. NASA scientist Bonnie Buratti says that

one "hot topic" was the presence of organic material on Enceladus: "The moon is almost pure water ice, but we think we found some light organics during our previous flybys. 'Organics' are materials composed of hydrogen, carbon, oxygen and nitrogen, the building blocks of life. With liquid water and the presence of organic material, the conditions on Enceladus may be similar to those in the oceans where life arose on the young Earth" [The Guardian].

In October Cassini will pass by Enceladus again, and will dip down to within 16 miles of the moon's surface for a closer look at the geysers' sources.

NASA has pegged Enceladus as one of the most likely places in the Solar System (along with Mars and another of Saturn’s moons, Titan) to be able to support extraterrestrial life [Scientific American].

The SciencesSalty Lakes Found Beneath Mars' Surface
Recommendations From Our Store