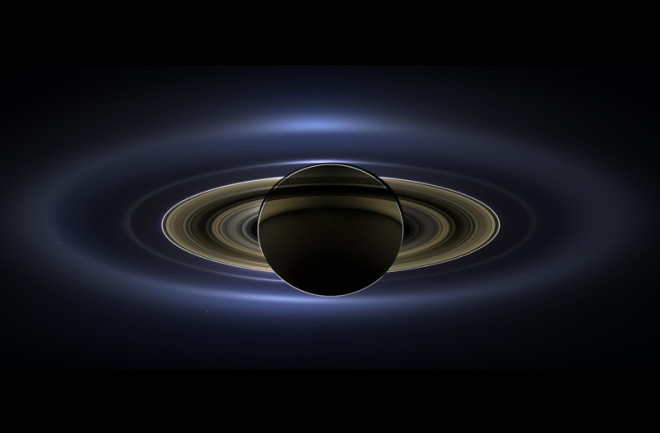 Using observations from NASA's Cassini spacecraft, researchers have found that Saturn's rings are actually much younger than the planet itself. (Credit: NASA/JPL-Caltech/SSI)

During NASA’s Cassini spacecraft’s Grand Finale, the craft dove between the planet and its rings. In doing so, it collected new insights into the ringed planet, including the surprising age of Saturn’s rings. According to a new study, scientists have found that Saturn’s rings are actually much younger than the planet itself. And they most likely formed in the last 100 million years.

Before swooping in between the planet and its rings, Cassini orbited the planet outside of its rings. That made it hard to separate the gravitational effect of the rings from the gravity of the planet and, in the process, find the rings’ mass. Scientists have suggested that the mass of Saturn’s rings is directly linked to their age, so that answer had to wait until Cassini’s final days.

As the craft dove between Saturn and its rings, researchers monitored a radio link between the spacecraft and Earth. This allowed the team to accurately measure the gravitational field around the planet without the gravitational effect of the rings getting in the way, according to study author Luciano Iess of the Sapienza University of Rome.

And, after finding that the rings have a fairly low mass, they came to the conclusion that the planet’s rings are only 10 to 100 million years old. This is much younger than the planet itself, which is estimated to be 4.5 billion years old. “There were already clues from Voyager and Cassini measurements that the rings had not formed with Saturn,” Iess said. “But now we have much more concrete evidence, which was only possible to obtain during the final phase of the mission.”

Now, while these results reveal the age of Saturn’s rings, they do not explain how or why the rings formed so recently. “A catastrophic event like a collision looks to me the most obvious explanation, but there may be problems with that too,” Iess said. “The origin of the rings has to be put in the broader context of the dynamics of the Saturnian system. There are colleagues who think that even the inner moons of Saturn are young, and they are migrating inward.”

In addition to revealing the age of Saturn’s rings, the gravity measurements taken during Cassini’s close passes allowed the team to uncover more information about the planet’s gaseous interior structure. Saturn, which is mostly made up of hydrogen and helium, has an interesting atmosphere. The outer layers of its atmosphere rotate faster than its inner layers. Using this new data, the team determined how much faster the outer layers rotate than the inner layers. They also found that the planet begins to rotate uniformly at a depth of about 5,592 to 6,214 miles (9,000 to 10,000 km).

This new study also revealed the size of Saturn’s core. Made up of heavy elements, the team found that the planet’s core is about 15 to 18 Earth masses, or 15 percent of the total mass of the planet. According to Iess, this finding could allow researchers to better understand how the planet and its moons formed.

The research was published in the journal Science.