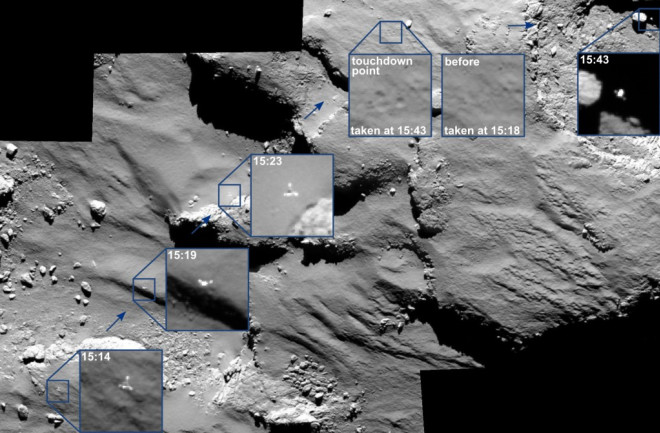 A mosaic of images captured by Rosetta’s OSIRIS camera over a 30 minute period shows the Philae lander drifting above the surface of Comet 67P as it descended, and then making a big bounce after its first touchdown. Note the time of each inset image marked in GMT. (Source: ESA) Before coming to rest on the surface of Comet 67P/Churyumov–Gerasimenko last Wednesday, the Philae lander bounced twice. That much European Space Agency scientists knew fairly early on. But now, we can see it with our own eyes. The mosaic of images above, taken by a camera on the orbiting Rosetta spacecraft, shows the Philae lander drifting above the comet's surface as it descended — and then taking a big bounce after making its first brief touchdown at about 15:43 GMT. Inset photos show closeups of Philae with timestamps in GMT. Toward the upper right, there are two insets, one showing what the surface looked like before Philae touched down, and the second what it looked like afterwards. Note the subtle depressions in the surface, apparently left by the lander's feet. The last inset image, in the upper right corner, shows Philae after it had rebounded from the surface, moving toward the east. Later on (and not visible in this image mosaic), the lander touched down again, only to rebound a second time before coming to rest under a cliff and on its side. Despite these travails, Philae actually managed to complete its primary science mission during the course of 57 hours on the comet's surface, according to ESA:

In that time, the lander returned all of its housekeeping data, as well as science data from the targeted instruments, including ROLIS, COSAC, Ptolemy, SD2 and CONSERT. This completed the measurements planned for the final block of experiments on the surface. In addition, the lander’s body was lifted by about 4 cm and rotated about 35° in an attempt to receive more solar energy. But as the last science data fed back to Earth, Philae’s power rapidly depleted.

That's because the cliff is shading Philae's solar panels. So now, Philae is in hibernation. ESA scientists are hoping that as the comet moves closer to the Sun there might be enough solar energy available for the lander to wake up and re-establish communication. In the meantime, Rosetta will be hunting for Philae's final landing site. And it will continue orbiting 67P, taking detailed measurements and capturing images as the comet speeds ever closer to the sun until its closest encounter on August 13 of this coming year.