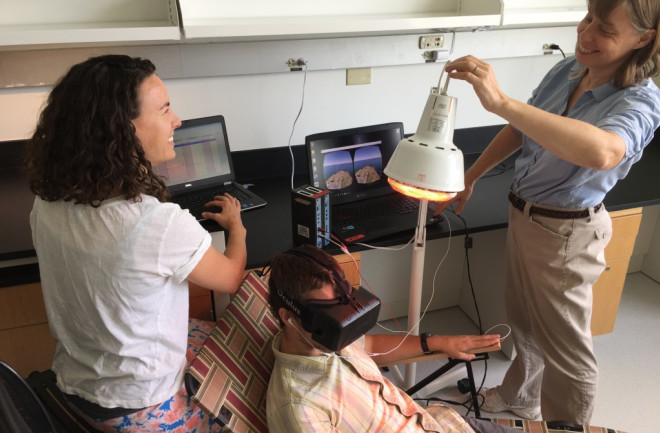 Scientists at Dartmouth College are experimenting with virtual reality headsets like the Oculus Rift to see if simulated environments can break the monotony of space travel. (Credit: Courtesy Jay Buckey)

While astronaut Scott Kelly spent his year on the International Space Station, he expressed frustration with the ho-hum accommodations inside the ISS — it’s dullsville.

The temperature remains exactly the same day in and day out. The décor is a sterile mix of machines and wires. Astronauts are isolated, confined to small spaces and under a considerable amount of stress. While the vistas outside their window are no doubt spectacular, humans need a hint of nature’s greens and blues to stay happy.

The interior of the Columbus laboratory on the International Space Station. You get a sense of the sterile surroundings. (Credit: NASA)

The monotony of space can fray the nerves of even the most seasoned astronaut, and psychological stress is a serious side effect of living in a habitat of connected tubes orbiting Earth. So scientists at Dartmouth College are experimenting with virtual reality headsets like the Oculus Rift to see if simulated environments can break the monotony of space travel, and reduce psychological stress that astronauts experience on long duration missions.

“Things can go badly if the psychosocial elements aren’t managed properly. When you talk about longer and longer missions with a small crew it becomes really critical to have that social aspect right,” he says.

Floating in a Virtual World

Jay Buckey — a former space shuttle astronaut — is now a professor of space medicine and physiology at Dartmouth. Each space shuttle mission runs around three weeks, so Buckey’s not experienced the same monotony as Scott Kelly. Despite his pleasant trip to space, he still felt called to help. Buckey and his colleagues are using calming imagery to see if virtual scenes reduce stress levels.

“I wanted to focus on many of the issues that would serve as a barrier to long duration spaceflight,” says Buckey. “The psychosocial adaptation element is crucial to a good mission.”

His theory is that exposure to bucolic landscapes — even virtual ones — can reduce stress. To do this, Buckey and his team created two types of “escapes” for the subjects to try. The test subjects were either given a trip to the lush green hills of Ireland, or a serene beach landscape in Australia. As a control, test subjects sat in a classroom and researchers measured their heart rate and skin conductance.

“We are assuming that natural scenes will be preferred,” explains Buckey. “But, people in an isolated and confined environment might want an urban scene.”

To quantify the stress relief, Buckey’s team will measure the electrodermal activity in the skin of their test subjects to track fluctuations of psychological arousal and stress, providing insights into who is responding best to a given scene.

Buckey is also adding another twist to his experiments: shining a heat lamp on subjects viewing a beach scene to enhance their virtual experience.

“VR is an immersive world and we would like to optimize the scenes to find out what it is about these that people find the most compelling. As the tech improves and you get higher definition video you can really immerse somebody in a nature scene,” says Buckey. “Would people rather have a vista, or animals, and what other kinds of sensations would people like?”

Currently astronauts on the International Space Station use a tool called the Virtual Space Station — essentially a virtual therapy session. This VR software doesn’t provide stress reduction in the way that Buckey is exploring, but it has tools for conflict resolution, and training on how to handle interpersonal disagreements if and when they arise.

Buckey’s experiments are still ongoing, so his results aren’t finalized. However, the notion that nature is good for our brain is nothing new — dozens of scientific studies back this up. In a more recent study, researchers from South Korea used fMRI to measure subjects’ brain activity when they looked at nature scenes versus urban scenes. Urban scenes activated the amygdala, which is linked to heightened anxiety and increased stress. On the other hand, nature scenes caused more blood to flow to regions in the brain associated with empathy and altruistic behavior.

At the University of Verona in Italy, researchers showed that “being in” a natural setting improved cognitive functioning, and participants completed tasks more efficiently with less mental fatigue. Nature can also lower our blood pressure and heighten our mood.

The data from the Dartmouth lab won’t be published for several more months, but the team hopes its experiment will move one step closer to helping future astronauts, and other people who work in isolation, cope with stress.

If it turns out that the data from Buckey’s experiments show a reduction in stress, future astronauts could perhaps work a regimen of VR medicine into their weekly routine. So far, Buckey thinks the preliminary results are encouraging, but “these are highly individualized responses, and is very subjective.”

“It depends on the outcome of what we have. We haven’t really proven that it works that well yet so I think its important for us to show that there’s a tangible benefit to having this.”

Lessons from the Past

In 1980 a group of scientists ventured off into the cold and isolated region of Antarctica as part of the International Biomedical Expedition. The IBEA was designed to understand how the human body would acclimate to extremely cold environments, isolation and the psychological responses to this type of stress. It dramatically highlighted the need for stress reduction for team members.

As the expedition continued, crewmembers grew homesick, isolation wore them down and they grew more and more irritable. Several scientists on the team simply walked out of the experiment before it was completed, due to these stressors.

In the 1980s, psychological stress drove a rift between cosmonaut Valentin Lebedev and his commander Anatoly Berezovoy while they were living aboard the Russian Space Station Salyut 7.

Lebedev wrote a book called Diary of a Cosmonaut where he shared stories of conflicts so severe that they sometimes went weeks without speaking to each other. In space, and especially on a longer mission to Mars, communication is key. Conflicts of this scale aren’t an option. In other words, keeping stress levels low is key to planning a successful mission.