Thabet points me to a new survey of Muslims and the European public. The focus is especially on the UK, France and Germany. In short Muslims in these three nations are more "conservative" than the general population when it comes to social values, but, it is interesting to note that there seems to be an effect of the host culture on the Muslims (i.e., French Muslims track the French, and so forth). But I want to highlight the extreme social conservatism of British Muslims. For example, apparently no British Muslims in the survey thought that homosexual acts were morally acceptable. The whole report is worth reading, but below the fold I put the attitudes toward social mores of the three Muslim populations and the general populations in France, Germany and England. The rows alternate between French, German and British surveys, in that order. So the first three rows show the % who think that homosexual acts are wrong for the French, German and British public & Muslims, in that order. All subsequent rows are in that order as well.

And here's a scatter plot:

% Who say abortion is “morally acceptable”7835

% Who say that suicide is “morally acceptable”4314

% Who say that the death penalty is “morally acceptable”3524 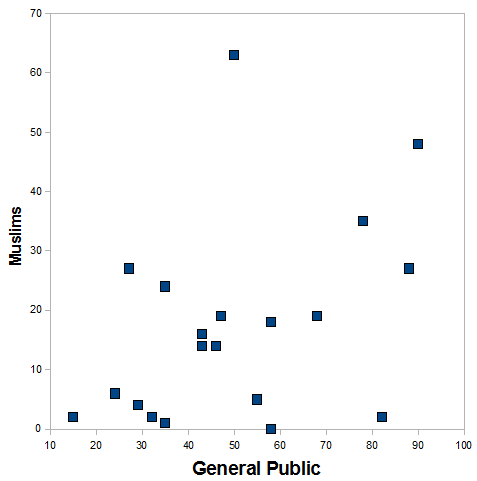