More than 1,000 new images of the planet reveal startling results. 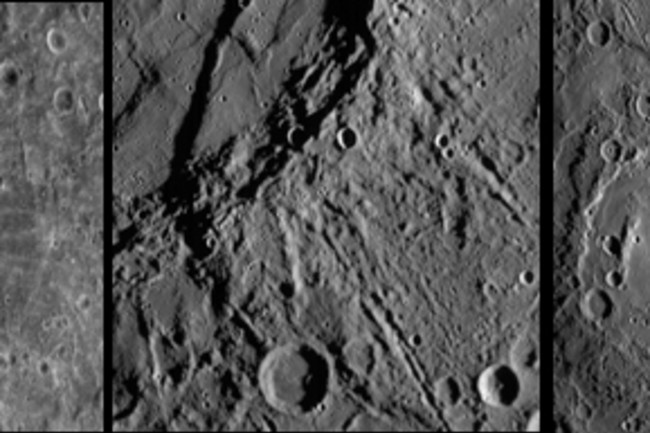 In the first pass by planet Mercury since Mariner 10’s 1975 visit, the Messenger spacecraft has captured 1,213 stunning new images. Sean Solomon, principal investigator on the mission, explains a few of the unique pictures of the solar system’s innermost planet:

Spider (left): “The ‘spider’ is unlike any feature Mariner ever saw. There are nearly a hundred sets of extensional faults that burst out from the central region. They look like the legs of some creature that was squished billions of years ago.”

Fault lines (center): “This scarp [the black line running through the upper-left part of the picture] was formed by tectonic activity, where the right was pushed up over the left side, like a typical Earth fault line. This is Mercury’s dominant form of deformation [which, researchers believe, happened when] the planet was shrinking.”

Concentric rings (right): “As an impact on any planet gets bigger, the nature of the crater changes. Here, the original crater is now the outer ring—the inner ring is formed by other complicated geological processes that are part of the same initial event.”