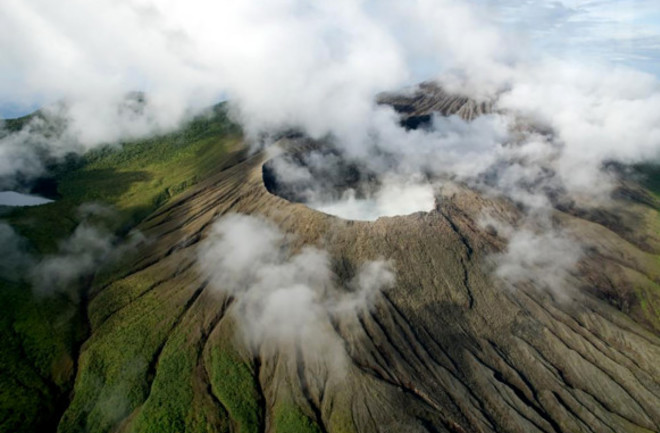 The Smithsonian Brief bit of volcano news from Costa Rica this week: Over the last week, Rincón de la Vieja has had a few small explosions that rained ash in the area near the volcano. This is the volcano's first bout of activity since a brief period of noise during September 2014. Neither explosion was particularly large, with a small ash plume that was less than a kilometer over the volcano. Volcanologists from OVSICORI, the volcano monitoring agency of Costa Rica, visited Rincón de la Vieja to get a better handle on the recent unrest. What they found was a number of small ash deposits related to other steam-driven explosions that have occurred since the start of 2016 (likely small enough to go unnoticed, especially if obscured by clouds). The most interesting thing they found was that ash from these explosions, although mostly chunks of pre-existing rocks and bits of sulfur, did contain a small component of what appears to be fresh lava (see below) in the form of small shards of volcanic glass (obsidian). This suggests that there could be magma lurking not too far beneath the summit crater lake area of Rincón de la Vieja. However, these explosions are dominantly steam-driven (phreatic) explosions, although the volcano bears watching if the explosions continue and/or increase in size and frequency.

Ash from recent explosions at Rincón de la Vieja in Costa Rica. Box A is the overall look of the ash. B and C are glass fragments potentially from new magma involved in the eruptions while D is a bleb of sulfur.

The summit crater lake is also emitting more magmatic gasses like hydrogen sulfide and sulfur dioxide compared to recent years and is warmer as well (45-55ºC). Much like the shards of glass in the ash, these changes in the lake suggests to OVSICORI that there might be magma moving closer to the surface. What is most important is OVSICORI's concern that these changes at Rincón de la Vieja might mean the volcano is entering a more dangerous period where the potential for larger explosions and lahars (volcanic mudflows) is increasing. This means that people living near the volcano need to play close attention to how the volcano is behaving. The last large eruption from Rincón de la Vieja was a VEI 3 eruption in 1966, although it has produced numerous smaller explosions in the half century since that eruption. In Costa Rica, Poás, and Turrialba have been much more active over the last two years. The most famous Costa Rican volcano, Arenal, has been surprising quiet since 2010 after 32 years of near-constant eruption.