A commenter below wondered how much of Southern American religiosity is just a function of black religiosity, seeing as how blacks make up a larger portion of the American South's population. A fair amount. That being said, I decided to look at two GSS variables, GOD & BIBLE, and break them down by region & race. The regions are from the Census, and I dropped all the regions where the N's for blacks were less than 100. Obviously there aren't that many blacks in the Mountain region, so comparing that region's blacks & whites is going to be difficult with a GSS size sample. In any case, two charts below. 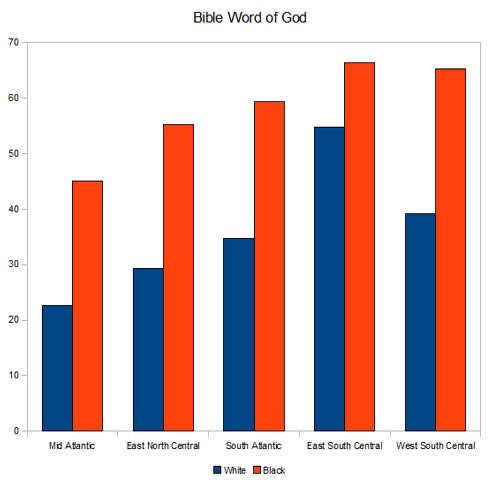 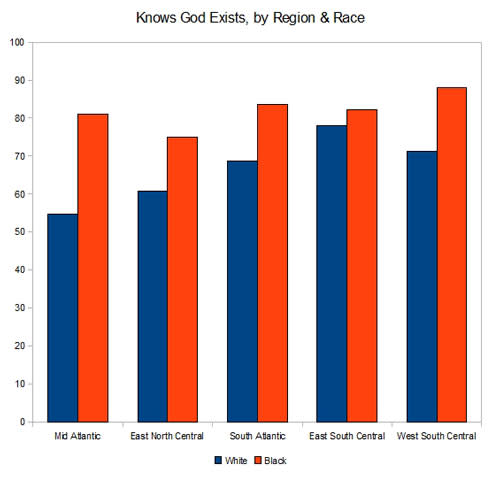 Blacks are more religious than whites in all regions, but, the difference between the two groups is the smallest in the "McCain Belt," Mississippi, Alabama, Tennessee and Kentucky. While there's no interregional difference in theism among blacks, it is interesting that both whites and blacks exhibit the same variations in Biblical literalism. Though blacks are more literalist on the whole the difference is again most attenuated in the McCain Belt. Regular readers will recall that the McCain is also the same region where whites hold the most reactionary positions in regards to race relations; e.g., only 49.5% of whites in the East South Central region would not object to a black person coming over for dinner. In the Mid Atlantic the figure was 80.5%.