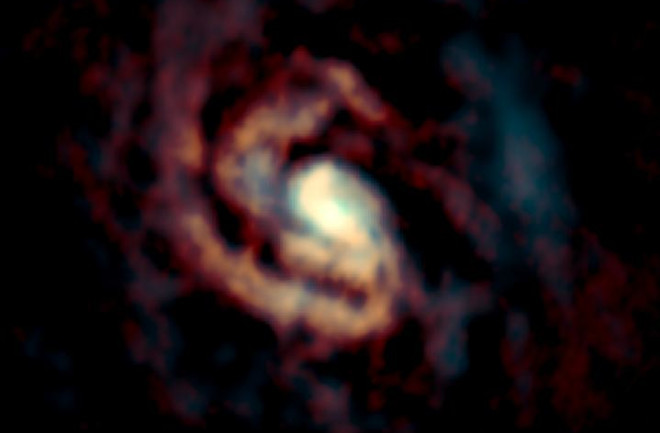 Where once were donuts, now there may be fountains. Not literally, unfortunately, but new astronomical observations are rewriting scientists’ conceptions of what the area around a black hole looks like, and the new evidence seems to lean heavily away from the morning delicacy.

Scientists estimate that most galaxies have a supermassive black hole at their center, pulling in everything around them with tremendous gravitational forces. Up until now, astronomers believed that before material falls into a black hole it builds up into a structure that looks something like a cosmic donut.

Takuma Izumi, a researcher at the National Astronomical Observatory of Japan (NAOJ), led a team of astronomers that used the Atacama Large Millimeter/submillimeter Array (ALMA) to observe the supermassive black hole at the center of the Circinus Galaxy 14 million light-years from Earth. And, in their research they found that the material surrounding black holes actually looks much different.

The team compared their observations with a computer simulation they created that simulated gas falling towards a black hole. When they compared their observations with the simulation, they found that what astronomers had previously thought was a rigid “donut” structure around black holes wasn’t actually solid at all. They instead found a dynamic circular pattern of gas that resembled a water fountain.

This “fountain” is created when cold gas falls towards the black hole and form a disk. As the gas gets closer to the black hole, it starts to heat up and break apart into individual molecules and then atoms and ions. Some of these hot atoms are absorbed by the black hole, but some shoot out above the disk and some shoot out below. These atoms then fall back onto the disk, creating a three-dimensional structure that continuously circulates the molecules and atoms of hot gas. The best terrestrial analogue is probably the water fountain in your city park.

“By investigating the motion and distribution of both the cold molecular gas and warm atomic gas with ALMA, we demonstrated the origin of the so-called ‘donut’ structure around active black holes. Based on this discovery, we need to rewrite the astronomy textbooks,” Izumi added in a statement.

The finding completely alters what some once considered to be astronomical fact. Still, it’s the first time researchers have suggested that these donuts are actually fountains, so the claim is likely to face further scrutiny.

This work is published in The Astrophysical Journal.