Birds of a feather flocking together

It's been a few weeks, but I thought I would point you to an interesting post on OkCupid's blog about race and dating. They report an interesting trend of preference for white men among all groups of females, as well as lots of other interesting nuggets. Of course, as many have noted the core demographic of OkCupid is a bit different than the general population, and might be especially so when it comes to racial minorities. I did think though that the stated racial preferences of the sample are interesting in light of other data which suggest women are more racialist than men. 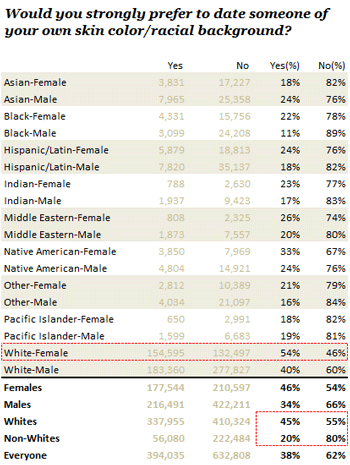 In all classes women have stronger same-race preferences than men, except for among Asian women. In previous speed dating studies Asian women were exceptional for showing little racial solidarity with Asian men, so this follows intuition. Also, there is a healthy surplus of males on these dating sites. That might naturally modulate their stated preferences a bit in relation to women. I am a little bemused by the OkCupid blogger's outrage at these data. This sort of bias isn't surprising at all from what I have heard (if you're a colored guy who swaps out your image with a white guy and leaves everything else the same in the biography and preferences, you're in for a sweet surprise which you'll never be able to follow up on). Next: OkCupid data shows that nerdier men get fewer responses!