Beyond Earthrise: Other Views from Apollo 8 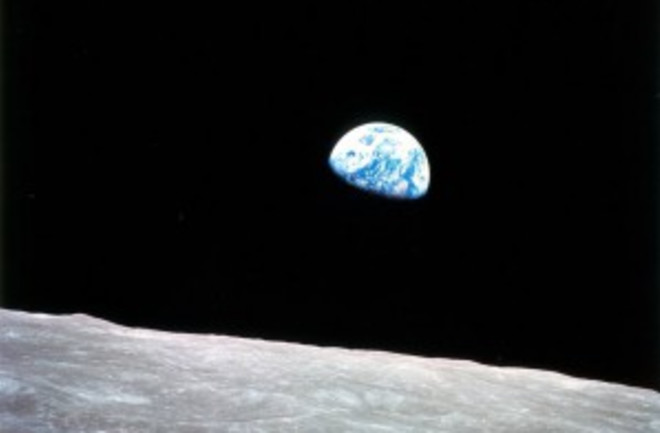 “Earthrise” was taken 50 years ago this Christmas, and it’s one of the most — if not the most — iconic images of the 20th century. It’s the image that gave us the idea that we went to the Moon and discovered the Earth. But there are so many other firsts that Apollo 8 brought us, so I thought we ought to take a minute to look at some of the less celebrated but still absolutely incredible images from Apollo 8.

But First, Who Took That Iconic Apollo 8 Earthrise Image?

A Brief History on the Mission

It wasn’t a mission NASA had originally planned for. The agency intended to launch missions of increasing difficulty flying in alphabetical order. The “A” was an unmanned launch of the Command and Service Module (CSM) on a Saturn V rocket in Earth orbit (that turned out to be Apollos 4 and 6). The “B” mission would repeat the same mission with a Lunar Module (LM) (Apollo 5). The “C” mission would be a manned A mission (Apollo 7), the “D” mission a manned B mission (Apollo 9), then the “E” mission would fly in a high elliptical orbit. The “F” mission would go to the Moon for a dress rehearsal (Apollo 10), and the “G” mission would try for a landing (that fell to Apollo 11).

Things didn’t go according to plan, in short, because the Lunar Module fell behind schedule. Apollo 8 was supposed to be a “D” mission, but without a Lunar Module still in development, that mission couldn’t fly. The solution was to make it a “C-prime” mission — fly to the Moon without a lunar module. Rather than go all that way just to swing around and come back, NASA decided to test the lunar orbital portion of the Apollo missions by putting Apollo 8 into orbit for 10  revolutions before coming home.

Starting with the launch. This is admittedly a pretty commonly used image, but it’s gorgeous and also the first time men launched on the massive Saturn V rocket.

Humans had seen the Earth from space before Apollo 8, but the view never gets old.

Apollo 8 was marked the first time humans saw the Earth retreating, getting small and smaller as they got further away. And some of those mid-translunar coast images (aka from halfway along the trip to the Moon, are totally gorgeous. And my personal favourites? The pictures that aren’t perfectly framed. There’s something so human in this, like you can feel how rushed and excited the crew was to capture this amazing sight for the first time in human history.

Then, of course, Apollo 8 went into orbit around the Moon on December 24, and got the first up-close look at our satellite. This was one of the dozens upon dozens of pictures taken in lunar orbit.

Another view from lunar orbit that might look familiar is this one, a less perfectly framed image of the Earth rising over of the Moon’s horizon. Personally, this is my favourite. The whole Earth is there, but the bit of windowsill reminds you that this was taken by three pilots who scrambled to capture something awe-inspiring. There’s such a subtle human element here. (I have a similar shot from Apollo 11 framed on my wall signed by Mike Collins!)

Leaving the Moon, Apollo 8 got this incredible view of the Moon’s terminator, the line where lunar day fades to night. I mean, look at the detail in those craters!

This is a weird one but I sort of love it. A photography experiment had the crew photograph the Moon through coloured filters. It’s just a little eerie, but also awesome. (They also took some with a blue filter.)

A final one from the return home, the so-called transearth coast, is one of my favourites. Views of the receding Moon always make me sad. I know the crew was happy to be home and out of the everything-is-trying-to-kill-you environment of space, but I love the adventure of going there and get sad when it’s time to come home! With the bit of the windowsill in the shot, I love the reminder that it was people and not robots that went to the Moon.

I can’t write about Apollo 8 without mentioning the Christmas controversy. On December 24, the crew did a live TV broadcast from the Moon and read from the book of Genesis. And people were outraged. And people are still outraged! For me personally, as someone who isn’t of any Christian faith but loves history, I look at it as an historical event, plain and simple, that’s worth remembering because it was the first time people went to the Moon. Here’s a recap of the reading and the resulting lawsuit in a couple of older videos.

Happy Apollo 8 anniversary, everyone! And if you’d like to get an in-depth look at the mission, I highly recommend Apollo 8 by Jeff Kluger — an incredible book by one of my writing inspirations.