Today we're both off to The Salk to participate in The Science Network's ongoing annual conversation known as Beyond Belief. This year's theme is 'Candles In The Dark': 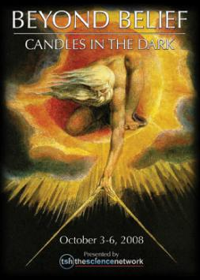 Beyond Belief: Candles in the Dark is the third in an annual series of conversations: an ongoing project to foster and promote the use of reason in formulating social policy. This year, we are asking participants to propose a Candle -- a potential solution to a problem that they have identified in their area of expertise or informed passion. In The Demon-Haunted World, Carl Sagan wrote: Science is more than a body of knowledge; it is a way of thinking. I have a foreboding of an America in my children's or grandchildren's time -- when the United States is a service and information economy; when nearly all the key manufacturing industries have slipped away to other countries; when awesome technological powers are in the hands of a very few, and no one representing the public interest can even grasp the issues; when the people have lost the ability to set their own agendas or knowledgeably question those in authority; when, clutching our crystals and nervously consulting our horoscopes, our critical faculties in decline, unable to distinguish between what feels good and what's true, we slide, almost without noticing, back into superstition and darkness. At The Science Network, we embrace scientific meliorism (last year's meeting, after all, was entitled Enlightenment 2.0). We support science in its search for solutions. Can we better understand the neural underpinnings of human nature, our decision-making processes, the dynamics of trust and fear and human flourishing? This U.S. election year, when science and reason in the nation's deliberations have been repeatedly challenged as irrelevant or elitist, and science seems to be estranged from society, Sagan's words sound prophetic -- an alarm call. Beyond Belief: Candles in the Dark is our response.

We're looking forward to participating in a fascinating series of discussions over the coming days. Readers in the area can register here.