Before Horses, Hybrid Donkeys Were Once Used For Battle

After analyzing genomes from ancient equid skeletons, researchers may have discovered proof of the highly-regarded kunga. 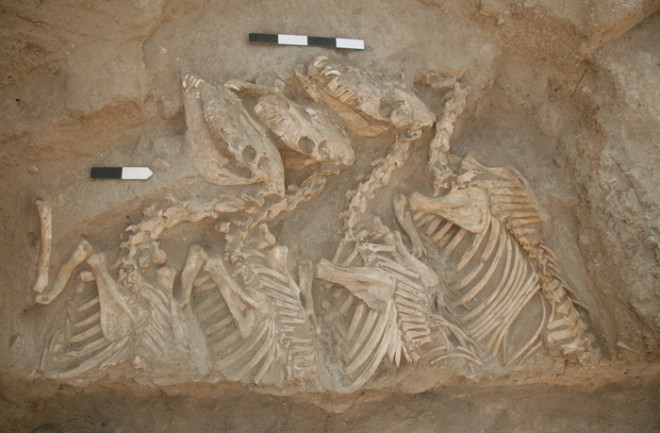 Umm el-Marra (in northern Syria) is a 4,500-year-old princely burial complex. Several equids have been found on the site, buried in their own installations. (Credit: Glenn Schwartz / John Hopkins University)

History regales us with tales of mighty armies swooping into battle on large, armored steeds. But before warhorses, Sumerians in southern Mesopotamia may have used donkey hybrids in battle, according to new research.

Depictions of battle wagons drawn by equids — a family of mammals that includes horses, zebras, donkeys and their now-extinct kin — can be seen on the “Standard of Ur” a famous 4,500-year-old Sumerian mosaic that dates nearly 500 years before the introduction of domestic horses to the region.

Cuneiform tablets found in this region discuss an equid of high value, known as a kunga. The kungas were stronger, faster and easier to tame than wild horses, hence a vital part of any army. Though researchers have debated the strength and stamina of these animals for decades, palaeogeneticists from the Institut Jacques Monod, may have reason to believe that these donkeys could be the esteemed kunga, as reported recently in Science Advances.

The Standard of Ur is nearly 500 years older than the arrival of domestic horses in the region, but still depicts equids charging into battle. (Credit: Thierry Grange/IJM/CNRS-Université de Paris)

The equid skeletons were found in Umm el-Marra, which is located in modern-day Syria. They were buried in their own installments, suggesting the animals were perceived as particularly valuable. Researchers performed genomic analysis on the skeletons and learned that these animals were the result of crossing domestic donkeys with wild donkeys — making them the oldest-known example of an animal hybrid.

Though the ancient animals’ genomes had degraded over time, the palaeogeneticists were able to compare them with those of other equids such as horses, domestic and wild donkeys that were also sequenced for the study. One of the genomes was pulled from the 11,000-year-old remains of a Syrian wild donkey breed that went extinct in the early 20th century.

The study offers convincing evidence that the esteemed kunga did in fact exist, in the form of a first-generation hybrid of a domestic donkey and a wild donkey or other type of equid. Since the male kunga was sterile, females were bred with captured wild donkeys. Domesticated horses were later introduced to the area and proved far easier to reproduce, putting an end to the breeding of the mythical kungas.