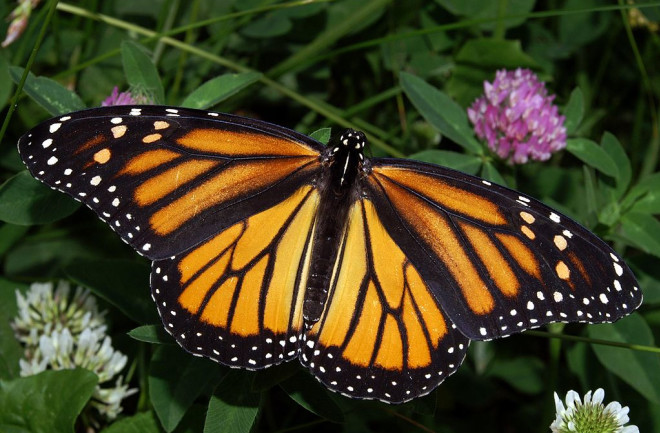 Kenneth Dwaine Harrelson/Wikimedia A monarch butterfly with its distinctive black and orange patterning. Beloved by tattoo parlors and fantasy princess landscapes, the king of butterflies is in decline. During their annual migration, monarch butterflies are famous for gathering in innumerable flutters as they fly from summer breeding grounds in the U.S. and Canada to warmer sites in Mexico and California. At one time, there were over a billion monarchs making this journey. Now, less than 4% are left. Over the years, human behaviors, particularly agricultural practices have contributed to the monarch’s decline. In a petition to protect monarchs scientists point to habitat loss as grassland is converted to farmland and overwintering sites are deforested as a major factor. On top of that, the cultivation of certain genetically engineered crops enable farmers to apply broad-spectrum herbicides killing weeds such as milkweed, the monarch caterpillar’s sole food source. Unlike honeybees whose population decline directly affects agricultural production, the decline of monarch butterflies may have gone unnoticed if not for the efforts of scientists and conservation groups. Every winter, The Xerces Society for Invertebrate Conservation counts overwintering western monarchs, a subset of monarch butterflies west of the Rockies. The butterflies arrive at the California coast as early as October and remain until spring. Counting butterflies might sound fanciful, but scientists need a complete survey to understand how the current butterfly population is faring. “There are over 400 identified overwintering sites, half of which are registered and active monitoring sites. It is a large geographical range for a small organization like ours to cover,” says Candace Fallon, a conservation biologist with The Xerces Society. To handle the work load, the group enlists citizen scientists to visit designated sites and count the number of monarchs present, or as the case may be not present. “We depend on volunteer assistance to gather data. We couldn’t do this important work without them.”

Xerces Society Western Monarch Butterflies have been declining. Since the counts started in 1997, western monarchs have fallen from 1.2 million to a little over 200,000 reported last year, almost a 90% decrease from their peak and a 50% decrease from their running 17-year average. Volunteers also gather information about habitat conditions and changes. “All this information tells us about the status of and factors affecting the western monarchs,” says Fallon. The biggest volunteer effort is the yearly Western Monarch Thanksgiving Count which takes place during the three weeks around Thanksgiving. The event wrapped up last week. You can hear the latest on this year’s count by visiting their website. Having the hard data is essential for informing local, national and even international policies. “Locally, we work with land owners and land managers to shape development plans and create strategies to promote monarch survival,” explains Fallon. Some of these strategies include encouraging farmers to plant milkweed in their hedgerows and allocate pollination meadows for butterflies and other pollinators. Collectively, the data gathered by various citizen science and research programs have helped bring about national conservation and protection efforts. Over the summer, President Obama issued a memorandum addressing steps to protect bees and other critical pollinators. In August, The Xerces Society in collaboration with the Center for Food Safety, the Center for Biological Diversity, and renowned monarch scientist Lincoln Brower submitted a petition to classify monarch butterflies as a threatened species under the Endangered Species Act.In fact, monarch conservation drew attention at this year’s North American Leaders summit. Canada, Mexico, and U.S. leaders pledged to create an advisory group to update the North American Monarch Conservation Plan. The issue will be revisited at the next summit scheduled for early next year.Though the Western Monarch Thanksgiving Count has end, volunteers are still needed to count butterflies throughout the overwintering season particularly during the first week of January. Visit their site for information on how to get involved. Find other butterfly projects at SciStarter.com.Sources:http://monarchjointventure.org/http://www.westernmonarchcount.org/http://www.biologicaldiversity.org/species/invertebrates/pdfs/Monarch_ESA_Petition.pdfhttp://www.fs.fed.us/wildflowers/pollinators/Monarch_Butterfly/migration/index.shtmlThe Xerces Society http://www.westernmonarchcount.org/data/