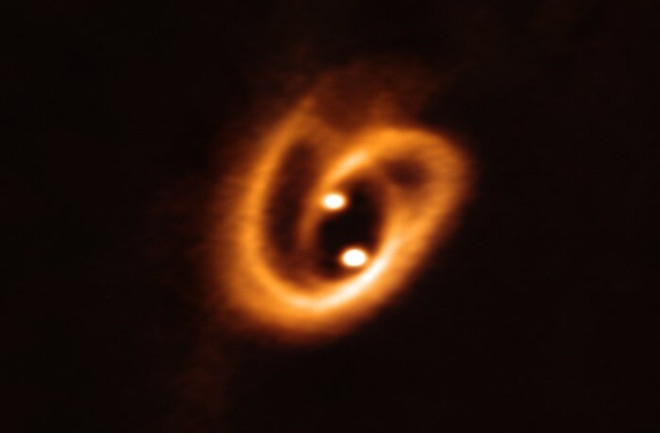 With the help of ALMA’s dust-penetrating gaze, researchers got this snapshot of a young stellar pair in action. (Credit: ALMA (ESO/NAOJ/NRAO), Alves et al.)

Astronomers recently imaged two budding stars locked in a gravitational waltz that twisted their planet-forming disks into a pretzel-shaped knot.

The stars, recently imaged with the Atacama Large Millimeter/submillimeter Array (ALMA), are giving astronomers a unique look at a nascent binary system. The discovery sheds new light on how binary stars — and their planets — form and evolve over time.

“We see two compact sources that we interpret as circumstellar disks around the two young stars,” study author Felipe Alves of the Max Planck Institute for Extraterrestrial Physics (MPE) said in a press release. Because the majority of stars are thought to be locked in such binary systems, learning about their early lives — especially how they form and maintain Tatooine-type planets — is of great interest to astronomers.

“The size of each of these disks is similar to the asteroid belt in our solar system,” said Alves, “and the separation between them is 28 times the distance between the Sun and Earth.” Cumulatively, the disks contain about 260 Earth-masses of dust, which led researchers to speculate the system may eventually form rocky, terrestrial planets.

“This is a really important result,” said co-author and MPE managing director Paola Caselli. “We have finally imaged the complex structure of young binary stars with their feeding filaments connecting them to the disk in which they were born. This provides important constraints for current models of star formation.”

According to Alves, “While the good agreement of these observations with theory is already very promising, we will need to study more young binary systems in detail to better understand how multiple stars form.”

The new research was published October 4 in the journal Science.