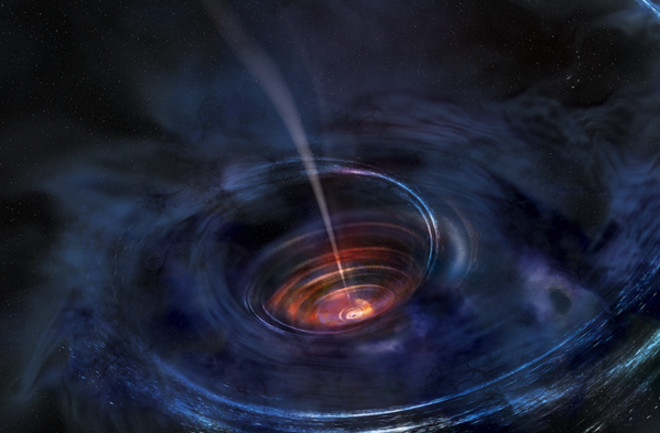 We can’t — yet — directly see black holes, making finding one of these elusive beasts hard, especially since a great majority of them are dormant. But researchers at the University of Maryland, NASA Goddard, and the University of Michigan recently caught one of these sleeping giants waking up to slurp on a big snack: a passing star.

A Star for Dinner

Called Swift J1644+57, the black hole is about 3.8 billion light-years away at the center of a relatively quiet galaxy. The supermassive black hole was initially spotted in 2011 when a passing star woke the hungry giant up. The black hole, which is itself invisible, shredded the material of the star into an accretion disk as it feasted, giving researchers a window into its activity. The new study, published today in Nature, outlines a unique phenomenon just discerned from the event: so-called X-ray reverberation, in which the energy is seen bouncing around as it prepares to be eaten.

“The basic idea is that there are primary flashes of X-ray emission, and we see that directly but it also gets reflected off the walls of the accretion disk,” Erin Kara, lead author of the paper, says.

By analyzing these reverberations, astronomers are better able to discern the geometry of the black hole by analyzing the accretion disk during one of these “tidal disruption events.”

Such events should be common, but they’re hard to spot. Most black hole regions emit energy in the X-ray spectrum, and to see X-rays, you need a space-based observatory like NASA’s Swift or the European Space Agency’s XMM-Newton to catch a glimpse. Researchers in 2011 got a sort of “early warning” on the event and were able to monitor it for 200 days.

“We caught it fairly early on in its lifetime,” Kara says. “It was long enough that it could form an accretion disk around this normally dormant black hole.”

The time delay in the emission lines gives a rough idea of not only what material is present, but what shape the accretion disk has assumed. Additional data on size is inferred through redshift and blueshift present. From there, the researchers build a more complete picture of not only the black hole, but its snack.

The Swift Gamma-Ray Burst Mission has been NASA’s main workhorse in this effort. But in its 12 years in orbit, it’s only seen three tidal disruption events.

“It's a very rare thing in the hard X-rays, and theory predicts that we should see more of them, but we are still waiting since 2011,” Kara says.

With a continuous eye in the sky viewing across the cosmos in X-ray, that could become more possible. Kara says that in the future, more and more powerful telescopes may be able to find a few optical signatures of a tidal disruption event too faint to otherwise capture. An all-sky monitor like the Large Synoptic Survey Telescope may be able to catch a few such events, and a potential observatory called the Lobster Transient X-Ray Detector may find a few more if it becomes part of the International Space Station.

“We don't know where these tidal disruption events are going to happen, so you need to look everywhere,” she says.