Astronomers Watch The Birth Of An Alien Planet 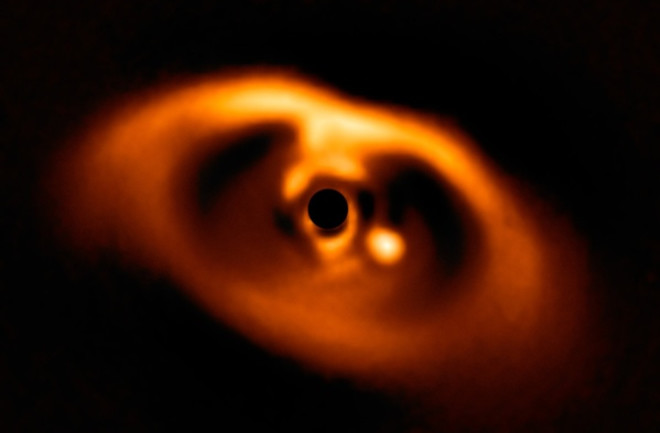 The newborn planet PDS 70b (bright spot right of center). (Credit: ESO/A. Müller et al) For decades, astronomers have thought that planets form out of the rotating disks of debris that encircle most newly formed stars. Within these so-called protoplanetary disks — which can be up to 1,000 astronomical units wide (1 AU is the average Earth-Sun distance of 93 million miles) — particles of gas and dust clump together over time, slowly but surely forming larger bodies that may eventually reach planetary status. However, despite years of searching, astronomers have so-far failed to directly image a planet forming within one of these hot and chaotic disks. That is, until now. In a new study published online Monday in the journal Astronomy & Astrophysics, a team of astronomers presented the first convincing observation of a planet-sized object orbiting within the circumstellar disk of its host star — in this case, a 10-million-year-old dwarf star named PDS 70, located some 370 light-years from Earth. The detection, which was made possible thanks to the cutting-edge SPHERE instrument on the European Southern Observatory’s Very Large Telescope (VLT), provides some of the strongest evidence yet supporting astronomers current theory of planet formation. “After decades of speculation, it’s nice to actually see one,” said Kevin Heng of the University of Bern in Switzerland, who was not involved in the study. “It’s very comforting.” Furthermore, in a second study, also published online Monday in Astronomy & Astrophysics, a separate group of researchers estimated the characteristics of the newborn planet, dubbed PDS 70b. The team concluded that PDS 70b is several times more massive than Jupiter (and a few times the diameter), has a cloudy atmosphere with temperatures of around 2,000 degrees Fahrenheit, and orbits its host star at roughly 20 AU, which is about the distance between Uranus and the Sun. Surprisingly, the team also suggests the baby planet itself is surrounded by its own disk of material (called a circumplanetary disk), though this is much more difficult to verify. By continuing to observe the planet using SPHERE and other instruments, the teams hope to both confirm their findings, as well as track the world as it move along its 120-year orbit. But for now, we will have to live with the beautiful baby picture we see above.