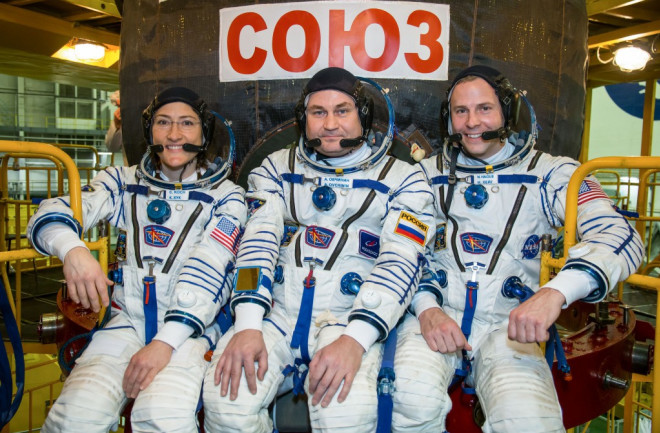 Three new crewmembers are launching to the International Space Station today, bringing ISS back to full capacity. (Credit: NASA) Three new crewmembers will join the International Space Station this week, launching today in a Soyuz vessel from Baikonur Cosmodrome in Kazakhstan at 3:14 p.m. EDT. The two NASA astronauts, Nick Hague and Christina Koch, will fly with Russian cosmonaut Alexey Ovchinin on a Soyuz spacecraft and dock with ISS after a six-hour flight. They will join NASA’s Anne McClain, Roscosmos’ Oleg Kononenko, and the Canadian Space Agency’s David Saint-Jacques, who have been in space since December, to start Expedition 59.

This launch will bring the space station back to full capacity, at six team members, and NASA has expressed excitement about the work that can be done with a full crew. There is a backlog of science waiting to be completed. Hague and Ovchinin were due to join the station back in October 2018, but problems during launch meant that instead they made an emergency landing shortly after takeoff. Both astronauts were unharmed, but it has left the crew on station with more work than originally planned. Expedition 59 will continue space station experiments ranging from biology to physics, as well as make improvements to the station itself. Three spacewalks are planned, one of which will mark the first all-female spacewalk with Anne McClain and Christina Koch. Both women, as well as Saint-Jacques and Hague, will also be making their personal first space walks during the expedition. The outings will upgrade the station’s current power systems and begin installations for a new science platform. NASA will stream the event on their webpage. After the 3:14pm EDT launch, coverage will resume with the Soyuz docking at 10:07pm, and the hatch opening and welcome ceremony at 11:30pm.