Ash from the Continuing Eruption of Turrialba Coats Costa Rica 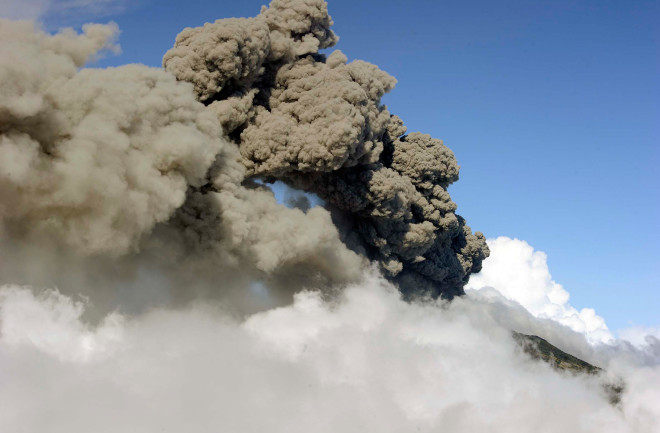 A column of ash and smoke erupts from the Turrialba volcano in Turrialba, Costa Rica, Thursday, March 12, 2015.

AP Photo/Grupo Nacion, Alonso Tenorio So far, 2015 has been an unsettled year for Turrialba in Costa Rica. The volcano has been producing on and off explosions for the past few years, but over the last few months, they seem to be larger and more frequent. Over the past few days, the volcano has really upped the ante, producing enough ash to coat much of Costa Rica's central valley with a thin (few mm) veneer of ash and to close Juan Santamaría airport in San José, (UPDATE 3/13/15 7:45 PM EDT: The airport has reopened.) the largest international airport in the country. Along with the airport closure, people living near the volcano have been evacuated and schools have been closed. You can see the constant stream of grey ash coming from the main crater in these videos and time lapses from Turrialba.

The ash plume from Costa Rica's Turrialba, seen in the webcam on March 12, 2015.

OVSICORI The ash plume has not been huge, possibly reaching ~1 km (3,200 feet) in altitude over the volcano, according to reports from OVSICORI (Costa Rica's volcano monitoring agency). However, winds have moved the ash to higher elevations, spreading it far from the volcano. The ash-rich and continuous nature of the eruption suggests (to me) that we're seeing new magma erupting from the vent rather than pulverized old dome material, but we won't know this for sure until the ash can be examined. Depending on conditions (both in terms of weather and the internet), you can check out the action in the OVSICORI webcam.