Melting glaciers are revealing ancient artifacts like Ötzi the Iceman and materials for ancient reindeer hunts. 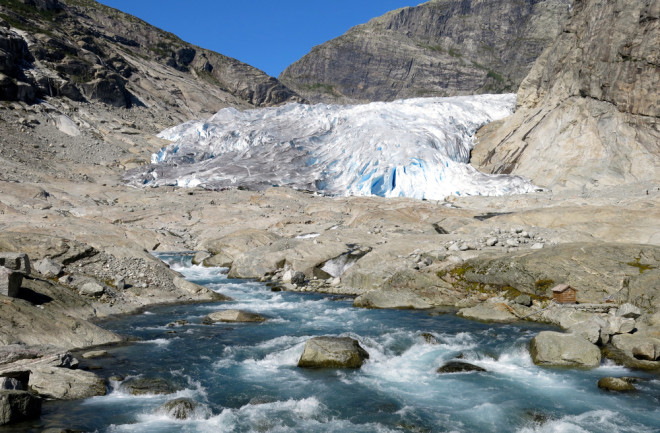 This article was originally published on September 23, 2022.

Glaciers and ice patches can sometimes hold remains for thousands of years in a deep freeze, preserving even delicate materials like feathers, skin or sinew — materials that rarely stand the test of time. Ancient arrows, clothing, toys or even a whole mummified human body can rest in a perpetual limbo. In a sense, it’s an archaeologist’s dream.

“That’s the crazy thing about it — it’s actually a gigantic prehistoric deep freezer,” says Lars Pilø, co-director at Secrets of the Ice, the glacier archaeology program of Innlandet, a Norwegian county. “Normally when we find stuff you can see it’s old. But some of these artifacts haven’t really aged.”

But as some glaciers and ice patches are now melting at unprecedented rates due to climate change, these ancient time capsules are thawing out for the first time in millennia. As a result, archaeologists are scrambling to keep up with the wealth of information that may soon begin to deteriorate as it’s exposed once more to the elements.

When tourists discovered Ötzi the Iceman in 1991 on a glacier near the Austrian-Italian border, they had no idea how old the mummy was. The 5,300-year-old mummy was protruding from the Similaun Glacier in the Ötztal Alps, for which he is named.

The preservation of a naturally mummified man this old, and in a condition apparently close to the way he was when he died, was an unprecedented discovery.

The body was so well-preserved that researchers have drawn a wealth of information from this single body frozen for millennia. An arrowhead that is still embedded in his back probably killed him. Before his death, scientists think he was in need of a dentist, and may have had some stomach issues, based on his last meals found in his gut. Some of the tattoos still found on his body could have represented a form of treatment similar to acupuncture, according to some research.

The Iceman’s clothes were even preserved, and his full genome has been sequenced.

More About the Iceman:

In Innlandet County where Pilø works, there was an uptick in artifacts about 15 years ago when there was a large melt in the area. “In 2006, we had a big shellshock because there were so many artifacts coming out of the ice,” Pilø says.

Ice patches revealed many materials related to ancient reindeer hunts, some going back as far as 6,000 years ago.

The way the artifacts were interspersed revealed how these hunts played out. The researchers found arrows and several one-meter stakes, which archaeologists determined were used to direct groups of reindeer toward waiting hunters. But this kind of discovery can also illustrate some of the limits of glacier archaeology.

While frozen artifacts may be particularly well preserved, glaciers aren’t static blocks of ice. They move like slow rivers, carrying whatever is buried inside along with them and often destroying artifacts in the process. Artifacts covered in ice centuries earlier could travel some way before they’re pushed out at the end of the glacier, where the ice typically melts.

Due to their movement, most glaciers won’t hold artifacts more than 500 years. And when artifacts are found in these regions, they often have been moved from where they first began. Many other artifacts are embedded in ice patches, which don’t move as much, if at all. Occasional melting at the surface, can result in artifacts washing downhill, though.

Some of the best information coming out of glaciers and ice patches, Pilø says, is preserved in mountain passes. These were places that often saw human travelers — Ötzi was found in a mountain pass, for example. These passes also have a wide variety of different kinds of sites compared to the hunting sites elsewhere. In 2011, when another large melt occurred at Lendbreen Pass in Norway, Pilø’s work revealed a 4,400-year-old arrow with a blunt end. It was so small that it wouldn’t have been able to penetrate anything if loaded onto a bow. The researchers determined that it must be a toy.

Lendbreen Pass revealed thousands of artifacts. Pilø says that archaeologists often survey ice in a team, walking close to each other along the edge of the melt, trying to spot sometimes infinitesimal artifacts. In 2011, archaeologists found a preserved mitten dating back to the A.D. 9th century, a complete wool tunic and leather shoes. In 2019, they found the remains of a domestic dog still attached to collar and leash.

Glacier archaeology has grown from just a small group of dedicated people, Pilø says. When the big melt happened in 2006, archaeologists in Norway were unprepared for it — there was no specific program for dealing with melting glaciers and ice patches. But Secrets of the Ice was formed in 2011 with permanent funding from the Norwegian government and Innlandet County Council.

Meanwhile, researchers elsewhere have made other incredible discoveries. In the Rocky Mountain National Park, they found an atlatl, a type of device used to hurl spears and dates back 10,000 years.