With the Orion capsule's safe landing, NASA has taken its first step toward getting astronauts back to the Moon for the first time in 50 years. 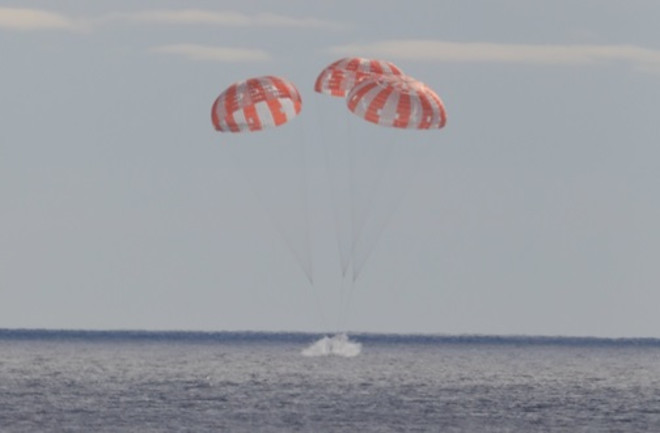 Artemis 1 officially concluded with a safe splashdown of the Orion capsule in the Pacific Ocean Dec. 11, 2022. (Credit: NASA)

NASA’s 25-day Artemis 1 mission came to a successful close on Sunday (Dec. 11) with a splashdown off Mexico’s Baja California coast at 9:40 a.m. PT.

The splashdown, which took place on the 50th anniversary of the Apollo 17 Moon landing, marked the end of the uncrewed Orion capsule’s journey to lunar orbit, which saw it travel a total of about 1.4 million miles (2.25 million kilometers).

The crew-rated capsule was sent to space atop NASA’s Space Launch System (SLS) during the rocket's first-ever launch on Nov. 16. The SLS rocket is the most powerful launch system now available. But the rocket’s first launch had been delayed several times during the summer and fall due to weather and technical issues. Once its engines finally ignited, however, SLS performed flawlessly, lofting the Orion capsule and European Service Module to the Moon.

Apart from minor anomalies, such as an unexpected loss of communication for 47 minutes on flight day eight, Artemis 1 appears to have passed with flying colors. Still, NASA and contractors will continue sifting through data and examining Orion as the days and weeks unfold.

During the mission, the uncrewed Orion capsule entered lunar orbit, carried out two flybys of the Moon — swooping as low as 80 miles (130 km) above the pockmarked landscape — and set a record for the farthest a human-rated craft has ever been from Earth, some 270,000 miles (434,000 km). Orion also stayed in space longer than any other crew-rated spacecraft that didn’t dock with the International Space Station (ISS).

In a NASA statement, Artemis 1 mission manager, Mike Sarafin, said that “we have successfully operated Orion in the deep space environment, where it exceeded our expectations, and demonstrated that Orion can withstand the extreme conditions of returning through Earth’s atmosphere from lunar velocities.”

Orion raced toward Earth at about 25,000 mph (40,000 km/h), carrying out one brief atmospheric “skip maneuver” to help it obtain an optimal trajectory before plunging into Earth’s air. Orion then deployed three huge red-and-white parachutes, which gracefully slowed the capsule to a speed of about 20 mph (32 km/h) for splashdown.

The Orion capsule was tended to by a Navy recovery team from the U.S.S. Portland, which loaded the capsule on board once technicians in the water ensured various systems were safe.

The spacecraft is now on its way to a U.S. Navy base in San Diego. After that, it will return to Kennedy Space Center, where personnel will offload space biology tests and mannequins that measured radiation exposure. NASA will also prioritize inspection of Orion’s heat shield, as it withstood temperatures of more than 5,000 degrees Fahrenheit (2760 degrees Celsius) during reentry.

The uncrewed (but crew-rated) Orion capsule captured this alluring view of the Earth and the Moon as it swung around our only natural satellite during the Artemis 1 mission. (Credit: NASA)

Alas, not everything went to spec when it came to Orion’s payload of small satellites called CubeSats. Three of them are presumed lost or dead: NEA Scout, a solar-sail mission meant to rendezvous with an asteroid; Team Miles, a communications and propulsion pilot project; and OMOTENASHI, JAXA’s tiny lunar lander.

Seven other CubeSats, however, are still alive, even if some are experiencing technical issues that their teams are addressing. These failures were not entirely unexpected. That’s because CubeSats are low-cost, high-return, but also high-risk ventures since they lack redundant systems to compensate for problems and failures.

Meanwhile, NASA is still sticking to its plans to launch Artemis 2 in 2024, a date that some observers feel is optimistic. While the SLS, Orion, and the European Space Agency Service Module all proved out, the agency still needs to recovery, test, and rehab avionics boxes from Artemis 1 for use in Artemis 2, according to reporting by Eric Berger at Ars Technica. This alone may slow the Artemis 2 launch.

Whenever Artemis 2 does launch, it will ferry humans back to the Moon for the first time in a half-century. However, Artemis 2 will not see a lunar landing. It won’t be until Artemis 3, scheduled for 2025, that humans again set foot on the surface of the Moon

Following the successful splashdown of Artemis 1, NASA Administrator Bill Nelson said: "It's historic because we are now going back into space, into deep space, with a new generation. We are adventurers, we are explorers, we always have a frontier; and that frontier is now to continue exploring the heavens."