The biggest geomagnetic storm in recorded history happened more than 150 years ago. Now, we’re entering yet another period of solar maximum. 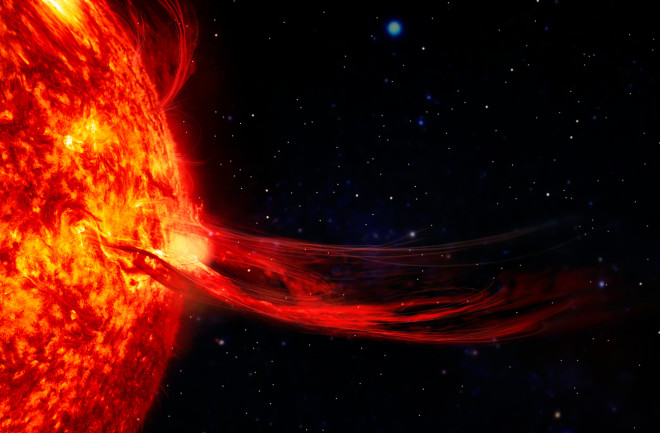 It was just another September night in 1859 when Richard Carrington and Richard Hodgson witnessed a remarkable event. The British astronomers weren’t together, but both happened to be peering at the Sun through telescopes at the precise moment that a massive ejection spewed from the fiery star. Within a few days, others on Earth noticed colorful aurora streaking across the skies and telegraph lines — the advanced technology of the day in Europe and North America — erupting in sparks.

The solar flare came to be known as the Carrington Event, named after one of the two astronomers who first described it. Despite occurring more than 150 years ago, it still stands as the strongest known geomagnetic storm (though we lack measurements to say precisely how big it was).

Earth has felt the effects of a few significant geomagnetic storms since then, all of which caused power blackouts and satellite damage. As a result, power companies and satellite manufacturers have built resistance into our technology. But what would happen if another Carrington Event-level solar flare occurred today? Would we be ready for it?

According to Alexa Halford, an associate chief of the Heliophysics Science Division at NASA’s Goddard Space Flight Center, the answer is a cautious affirmative. “There’s still a lot to learn,” she says, “but we’ve had success.”

Flares occur when electromagnetic radiation erupts from the Sun. These bursts often last a few minutes, though they are sometimes longer. They are sometimes associated with coronal mass ejections, which blow out gas material and magnetic fields. But not every solar flare or coronal mass ejection will have an impact on Earth; it depends on both the size of the burst and the direction it’s heading. If a solar flare occurs on the far side of the Sun, for example, it’s unlikely to affect us.

Even if it does happen on the near side, the direction of the burst often misses us — as we’re quite far away and a relatively small target compared to the Sun. This occurred in 2001, for example, when one of the largest solar flares in recorded history exploded into a coronal mass ejection at a speed of about 4.5 million miles per hour. Luckily, it swept by us on its way into space.

Technology was relatively simple in 1859 when the Carrington Event occurred, but it still had a big impact on telegraph lines. At the time, people had to unplug the wires to stop the sparks erupting from them. But they remained partly functional, thanks to the particles ejected from the flare that struck the current in the lines. “They actually had to unplug them, and they still had enough energy and currents to run for a period of time,” Halford says.

There have been earlier solar flares whose impacts were felt on Earth, of course. A Sun storm that occurred in 993 A.D. left evidence on tree trunks that archaeologists still use today to date ancient wood materials, such as the brief Viking settlement in the Americas. Another significant solar flare occurred during World War I. It wasn’t as large as the Carrington Event, but it still confused detection equipment. Technicians believed bombs were dropping when it was actually interference from the flare hitting the magnetosphere, Halford says.

A large coronal mass ejection recently struck Earth in March 1989, and the resulting geomagnetic storm caused serious havoc on Earth. The flare knocked out the power grids in Quebec and parts of New England, as the utility company Hydro-Quebec was down for nine hours. Power transformers even melted due to an overloading of electricity in the grid.

That 1989 event finally got the attention of infrastructure planners. “Those are the kinds of things that we have really learned our lesson from,” Halford says. Power companies began building safety measures, such as tripwires, into the electricity grid to stop cascading failure. If power increases too quickly, these tripwires are programmed to switch off so that damage is limited and transformers don’t burn out as they did in 1989.

Geomagnetic storms can also cause bit flips, surface charging or internal charging to satellites orbiting our planet — all things that occurred this October when a solar flare produced a coronal mass ejection and a geomagnetic storm that hit Earth. Satellites are particularly susceptible because they don’t benefit from the relative protection of our atmosphere. But most of the satellites launched in the past two decades have been built robustly enough that they are resistant to overcharging.

The bit flips occur when ionized particles from the solar outbursts switch the function of memory bits. This can cause big problems for GPS satellites, which effect everything from navigation to precision drilling. Even banking relies on GPS satellite to dictate the timing of transactions. “That kind of failure would really hurt the economy,” Halford says. “It’s important and definitely something we should be worried about.”

While satellites are now built more robustly, she adds that it’s unlikely a storm would take out enough GPS satellites to cause many larger problems, though. These problems can also sometimes be easily fixed by power cycling, or simply by restarting the affected device. The October flare caused some minor problems, but the Federal Aviation Administration didn’t report any major navigation issues, Halford says.

Not all impacts of a large solar flare would necessarily be negative. When these events occur, they thicken the density of Earth’s upper atmosphere. In effect, the atmosphere rises in altitude for a short period. This can impact the orbits of satellites, potentially causing problems, but it can also affect the orbits of space debris floating around up there. The extra drag could cause this junk to fall into orbit and burn up.

“You want some storms so we can naturally get rid of some of the debris,” Halford says. But it might be a double-edged sword, as the event could cause the orbital decay of operating equipment up there as well.

Another potentially positive effect for Earthlings living closer to the equator is the increased visibility of aurora. Northern lights and southern lights are caused when solar particles enter the atmosphere and collide with gas particles. This usually happens at the poles, where the magnetic field is weaker. But during solar flares, more of the particles make it through the atmosphere. Aurora borealis was recently visible in New York during the October solar storm.

These opportunities will only increase as we approach a period of solar maximum, which is when we see the greatest period of solar activity every 11 years or so. “The next few years should be really exciting because we will have a lot more chances to see the aurora,” Halford says.

This might also be a likely time for another big solar flare to strike. According to Halford, it’ll be a chance to see how well our safety measures and precautions can deal with this influx of solar particles — but don’t hold your breath. A study published in 2019 found the chance of a Carrington-like event occurring before 2029 is less than 1.9 percent. “A Carrington Event is one of those kinds of things that you kind of want to have happen,” Halford says, “because we think we can weather it.”