Are There Active Volcanoes on Venus? 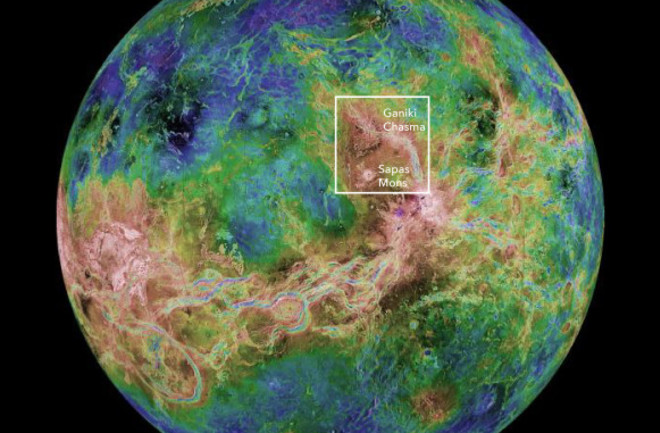 Radar image of the surface of Venus, assembled from Magellan data. Ganiki Chasma and Sapas Mons are shown in the white box -- possibly the sight of active volcanism. NASA/JPLEruptions readers have lots of great questions about volcanoes and this summer, I want to tackle some of them. So, for the rest of the summer while I’m in and out of the office, I’ll be trying to answer one reader question per week (along with trying to keep up with the usual volcanic news goodies). If you want to submit a question, you can send it to me (eruptionsblog at gmail), tweet it to me (@eruptionsblog) with the hashtag #summerofvolcanoes (or just #sofv) or leave it as a comment below. This week’s question might not have been submitted in this round, but is a question I get frequently and with some new news to help elucidate the question, I thought it was a good time for an answer.

Summer of Volcanoes #2Q: Is Earth the only planet with active volcanoes? What about Venus? Earth and Venus, on the surface, appear to be twins. They are roughly the same size, have an atmosphere, are made (mainly) of rocky, basaltic material. However, those similarities are broad, meaning that in many ways, Venus is nothing like Earth. It sits closer to the sun, so its year is shorter. It spins on its axis in the opposite direction that Earth spins. Its atmosphere is a choking cloak of carbon dioxide and sulfur dioxide. And its rocky surface, although complex, lacks any evidence of plate tectonics as we know it on Earth. Now, without plate tectonics, you could think that Venus would be a dead planet. Yet, if you look at some of the surface features on the planet, they look remarkably young -- perhaps even erupting in the geologically-recent past (few million years). Unfortunately, that thick atmosphere blocks our view of the surface, so from Earth, we haven't seen any direct evidence that there are active volcanoes on Venus. There have been times where events in the Venutian atmosphere suggested that an eruption could be occurring. Transient plumes of gases related to volcanic eruptions have been seen, but they could also be explained by upwelling and chemical reactions in Venus' complex atmosphere.

Potentially active lava flows seen in Venus Express images from 2008. The bright regions are much hotter than the surrounding land. Shalygin and others (2015), Geophysical Research Letters A new study in Geophysical Research Letters has even more evidence for active volcanoes on Venus, possibly even catching an eruption as it happened! Shalygin and others (2015) examined Venus Express images and found areas that appeared and disappeared on different orbits (so, over the course of weeks to months). These areas were also warmer than the surrounding landscape and they estimate that some of these features were as hot as ~1300-1400ºC. That would put them right in the upper range for basaltic lava (or even komatiite lava). They were relatively small, covering about the same area as lava flow fields on Earth. The geologic setting where these features are found also bolster this idea that they are lava flows. The Ganiki Chasma is a place where the surface of Venus is stretching and rifting, like the East African Rift on Earth. In places like the East African Rift, hot material from the mantle is rising, decompressing and melting to form the lava that erupts. Although Venus lacks the complexities of plate tectonics (at least that's what we think), an active mantle might support upwelling and rifting to occur. Gina Chasma seems to be associated with another large Venutian volcanic feature called Sapas Mons. This might suggest the whole region is related to a hot spot. So, areas that suggest rifting on Venus are likely targets for active volcanism, where magma is being generated and the crust might be thinner as it stretches. Based on their potential composition (using temperature as a guide) and the geologic setting of Ganiki Chasma, these lava flows might be a lot like what we saw in Iceland this year. The Holuhraun lava flows came from fissures opening in a diverging boundary (and hot spot) on Iceland. The lava flows in Ganiki Chasma aren't likely to be coming from a big volcano but rather fissure vents in the rift itself. So, if we combined the observations of sulfur plumes in Venus' atmosphere along with the observations of both areas where the surface features seem young & warm (cooling lava flows) and very warm (active lava flows), the case is becoming very compelling that Venus has active volcanism as well. If that's the case, it joins only Earth and Io as bodies in the solar system with currently ongoing molten rock flowing out onto its surface. It also opens some fascinating questions about just how volcanically active Venus is and what drives the volcanism. Without obvious tectonics, any rifting on Venus that stretches the crust has to be accommodated somewhere (no, Venus isn't getting bigger). Venus might be planet whose whole surface is like the oceanic crust on Earth, but why did Venus and Earth diverge so much from that common geologic point? That will be a question we'll likely be tackling for decades.