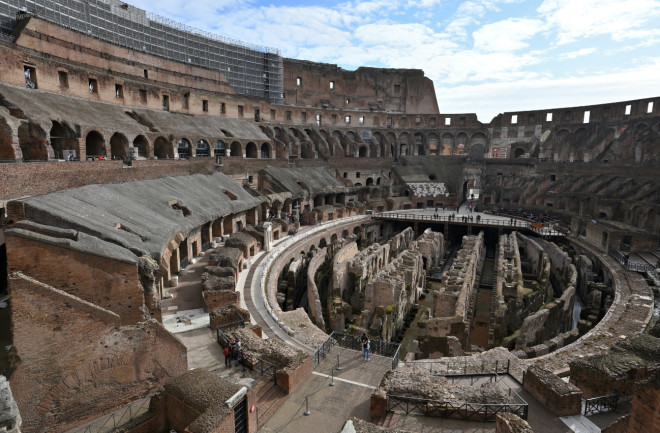 Gladiator fights, exotic animals, rowdy, toga-wearing spectators. These are some of the images Rome’s Colosseum may conjure in your mind.

But last year, archaeologists took to the sewer networks beneath the infamous amphitheater to learn more about what a day there really looked like.

Construction work on the Colosseum began between A.D. 70 and 72, under the rule of Emperor Vespasian, and the Flavians completed it around A.D. 80. (This is where the world wonder gets its alternative name: the Flavian Amphitheatre.) It is said to have opened with 100 days of games.

Towering to roughly 159 feet in height and measuring 620 feet in length and 512 feet in width, the arena could once hold more than 50,000 spectators. Believe it or not, that’s nearly the same capacity as Yankee Stadium in New York City.

It remained in use for nearly 500 years and today is renowned as one of the world’s premier historical attractions, with over six million people visiting the site each year.

Around A.D. 523, however, the Colosseum fell out of use as a means of entertainment — preserving its secrets in time and presenting archaeologists with a unique opportunity to uncover them, using wire-controlled robots, almost 1500 years later.

Archaeology Reconstructs the Past

To uncover these clues, archaeologists examined around 230 feet of the Colosseum’s sewers in a year-long study.

What they found offers some hints of what the average ancient Roman’s day trip to the Colosseum entailed: Seeds from figs, grapes, blackberries and melons were present, as well as olives and some kinds of nuts. The archaeologists believe that these were possibly common snacks during spectacles — possibly the equivalent to munching on popcorn at the cinema in our own age.

They also found gaming dice crafted from bone, along with pieces of clothing and over 50 coins. The latter, including dozens of bronze coins from the later Roman period, were possibly dropped by unfortunate spectators. According to reports, one rare coin in particular dates back to A.D. 170-171 and was minted in celebration of the emperor Marcus Aurelius’ 10th year in power.

Alfonsina Russo, director of the Colosseum Archaeological Park, told Reuters that these finds offer insights into the "experience and habits of those who came to this place during the long days dedicated to the performances."

A Dog in the Fight

The archaeologists also found bone fragments from some of the animals that fought in the arena; bears, lions and leopards among them. Meanwhile, remains of a small dog discovered among the refuse are believed to have belonged to a species similar to the modern-day Dachshund.

Hunters and trappers brought animals from the far corners of the expansive Roman empire, and beyond, to wow audiences that were eager to catch a glimpse of never-before-seen beasts. These animals were often pitted against one another and also fought gladiators in hunting fights.

And if you — like the audiences of the past — are craving to know more, you’re in luck: Investigations in the Colosseum’s sewer networks are ongoing and may yet uncover more secrets of the daily life of spectators at its ancient games.