Antares Rocket Will Launch Cargo From Virginia This Friday 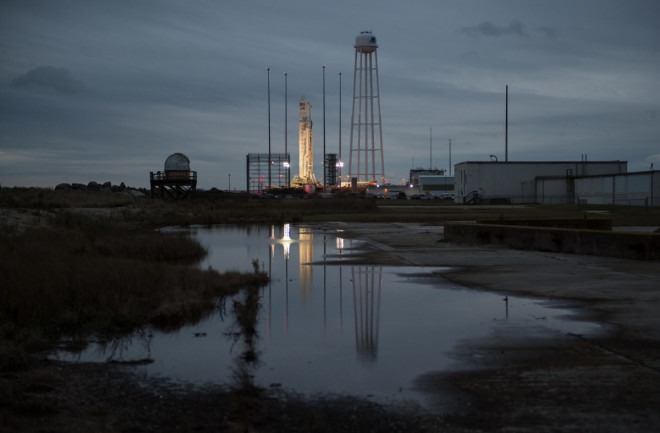 This week, Northrop Grumman’s Antares rocket will launch the Cygnus cargo spacecraft to the International Space Station. The craft will deliver supplies and scientific equipment to the astronauts on board as part of Northrop Grumman's NG-10 mission. Originally scheduled to launch early Thursday morning Nov. 15, the Antares rocket will now launch Friday, Nov. 16 at 4:23 a.m. EST. The rocket will launch from Pad 0A at Virginia Space’s Mid-Atlantic Regional Spaceport at NASA’s Wallops Flight Facility in Virginia. The Northrop Grumman Cygnus spacecraft has been dedicated to NASA astronaut and U.S. Navy officer John Young. In total, Cygnus will carry about 7,500 pounds of cargo to the space station. On board will be clothing, food, vehicle hardware, and scientific equipment to support research investigations on the space station.

Included in these investigations is the first-ever combined 3D-printer and recycler — a device known as The Refabricator. The Refabricator, which will be tested on board the ISS, turns waste plastic into 3D-printer filament, and it's testing an important element of future space travel — the ability to re-use almost everything to cut down on payloads. Cygnus will also be carrying what is known as a lab-on-a-chip investigation, which will allow researchers to better understand how muscles grow and repair in space. Additionally, an experiment is launching which investigates how gravity affects cement solidifying. [embed]https://www.youtube.com/watch?v=_hDj2Aa3CR0&feature=youtu.be[/embed] There are a number of other experiments launching in the Cygnus cargo spacecraft aboard Northrop Grumman's Antares rocket to the space station. These experiments will join the many other experiments that astronauts continue to carry out in space. Weather permitting, the rocket launch will be visible along the east coast. Live mission coverage will be streamed beginning at 10:30 p.m. EST the night before on Ustream sites. Launch coverage will begin on NASA TV at 4:15 a.m. EST the morning of the launch.