Announcing the 2017 Volcanic Event of the Year! 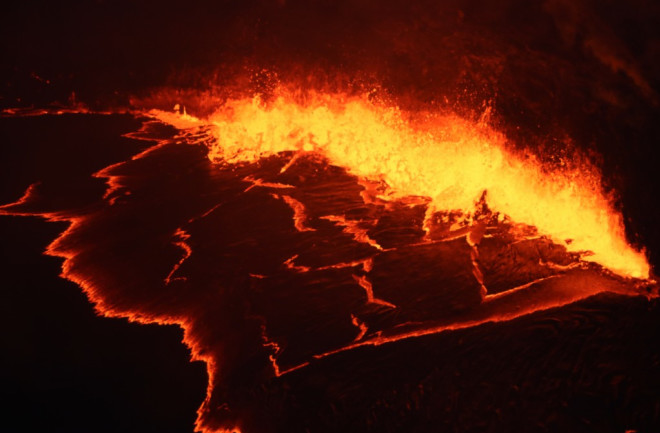 The spattering surface of the lava lake in the Halema'uma'u crater at Kilauea. HVO/USGS The ballots are in and the votes have been counted. Time to count down to the winner of the 2017 Pliny Award for Volcanic Event of the Year. Last year's champion was Bogoslof in Alaska and its activity continued into 2017, so can we have our first back-to-back champion or did another volcano's rumblings take the crown? First, some honorable mentions from the voting (which was done with 10 points for every 1st place vote, 5 points for 2nd place and 1 for 3rd place).

A gas-and-ash plume from Fuego in Guatemala, seen on January 25, 2017. Planet Labs - Wikimedia Commons. Although Fuego rarely made it into the media consciousness, it was one of the most consistent producers of the year. The Guatemalan volcano did a little bit of everything: Strombolian explosions, ash plumes, volcanic mudflows, lava flows. Some of the explosions spread ash upwards of 80 kilometers to places like Lake Atitlan, while lava flows snaked down the slopes of Fuego for multiple kilometers. The volcanic mudflows (lahars) were usually caused by heavy rain on the violcano that mobilized the loose volcanic debris -- some of these flows were powerful enough to sweep up trees 2 meters across! Luckily, most of these volcanic hazards have not caused a loss of life, but roads and other structures have been damaged by the repeated mudflows and ash falls. #4 Sabancaya, Peru

An ash plume from Peru's Sabancaya, seen on September 5, 2017. Ministro de Defensa presidió Acción Cívica en distrito de Cabanaconde, Arequipa. Much like Fuego, you didn't hear much about Sabancaya outside of Spanish-language news. However, this Peruvian volcano continued its now over one-year-long series of explosive eruptions. A gas-and-ash plume was a consistent feature over the volcano and regularly reached 2.5-3.5 kilometers (8,000-11,000 feet), usually generated by the thousands of small explosions that the volcano experienced over the year. All this restlessness meant that an area of 12 kilometers around Sabancaya has been closed off for all of 2017. #3 Bogoslof, Alaska

The steaming crater lake on Bogoslof, seen on May 8, 2017. Max Kaufman - U.S. Coast Guard Air Station Kodiak and U.S.C.G Cutter Mellon. Bogoslof destroyed an old island and made a new one in the process. The 2016 winner of the Pliny continued to rock into 2017, with sporadic explosions that would send ash and volcanic debris towering over 10 kilometers (32,000 feet). Luckily, thanks to Bogoslof's remote locations in the Aleutians, it rarely posed any threat beyond that to aircraft passing near the volcano when it decided to unleash a blast. However, the last rumblings from Bogoslof occurred in late August, so by December, the Alaska Volcano Observatory returned the volcano to its lowest warning level. #2 Sinabung, Indonesia

The start of an eruption at Sinabung in Indonesia, seen on June 13, 2017. Travelensa - Wikimedia Commons. The eruption of Sinabung on Indonesia's Sumatra has been going since September 2013 (and that doesn't count the first salvo that started in 2010 with a three year break). That's right, this is an eruption that will be entering its 5th year in 2018 and the humanitarian disaster has been immense. Repeated explosive eruptions have sent pyroclastic flows down the sides of the restless volcano, meaning large areas that were once fertile farmland and towns have been decimated. Yet, even after 5 years, there are still over 7,000 people who have yet to find a permanent home due to this volcanic disaster. Eruptions like this can last for even longer, so people who live just outside the official evacuation zone should expect a continued threat from Sinabung's eruptions. #1 Agung, Indonesia

The ash plume from the November 27, 2017 eruption of Agung in Indonesia. Michael W. Ishak - Wikimedia Commons. Sinabung might be the long-standing crisis in Indonesia, but it was Agung that really got everyone's attention in 2017, making the volcano a fitting recipient of the 2017 Pliny for Volcanic Event of the Year. Agung had been quiet since 1964, so when earthquakes began to spike in September, all eyes were on the volcano. Over 1 million people live within 30 kilometers of this beast of a volcano, so when signs seemed to point to an impending eruption, the evacuation saw 100,000 people leaving their homes. However, an eruption didn't start at Agung until November (after earthquakes began to decline), but since then, small explosions and a lava dome have been produced. It is unclear what direction these eruptions at Agung might go. The most likely scenario might be continued small explosions that send ash over Bali and Lombok. However, the 1964 eruption of Agung was one of the largest eruptions of the 20th century and a repeat of that event is in the back of everyone's mind. If anything, the runner-up for the 2017 Pliny might be a model for what we might expect at Agung moving forward: volcanic refugees for years to come -- and that doesn't even get into the impact on tourism due to the eruption. In a country like Indonesia, volcanoes are a way of life, but by no means is it any easier to live within their midst. Thanks for an excellent start to Rocky Planet here on Discover in 2017 ... and here's to an amazing 2018!