Andromeda May Have Eaten the Milky Way's Long-lost Sibling 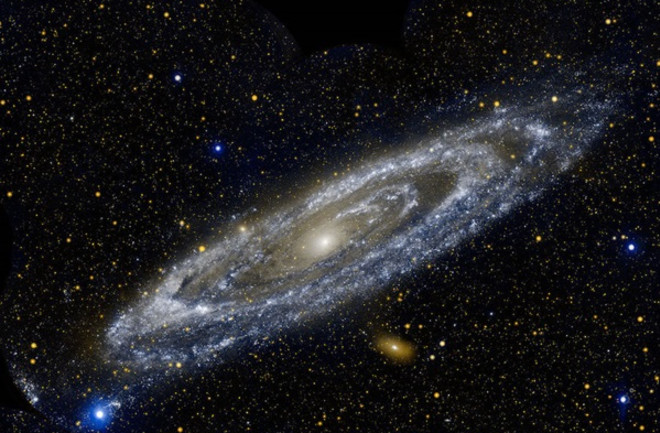 The Andromeda Galaxy, located some 2.5 million light-years from Earth, burns brightly in ultraviolet light in this image taken by NASA’s Galaxy Evolution Explorer. (Credit: NASA/JPL-Caltech) The Andromeda Galaxy (M31) is the largest member of the Milky Way’s gang of galactic neighbors, known as the Local Group. With around a trillion suns worth of mass, Andromeda’s gravitational influence is a force to be reckoned with. And according to new research, no galaxy in the Local Group knows this better than M32, an oddball satellite galaxy now orbiting Andromeda. In a study published today in Nature Astronomy, researchers showed that about 2 billion years ago, the Andromeda Galaxy cannibalized one of the largest galaxies in the Local Group, turning it into the strange compact galaxy known as M32 that we see bound to Andromeda today. This massive collision stripped M32’s progenitor galaxy (dubbed M32p) of most of its mass – taking it from a hefty 25 billion solar masses to just a few billion solar masses. “Astronomers have been studying the Local Group — the Milky Way, Andromeda, and their companions — for so long. It was shocking to realize that the Milky Way had a large sibling, and we never knew about it,” said co-author Eric Bell, an astronomer from the University of Michigan, in a press release.

Andromeda’s formation history is a bit of a murky subject. Although some previous studies have suggested that Andromeda grew over the eons by steadily merging with many smaller galaxies, others indicate that the galactic colossus underwent a single large merger at some point in its past. To investigate how Andromeda accumulated its mass, the authors of the new study ran cosmological simulations of galaxy formation to show that Andromeda’s observed properties — including a massive yet nearly invisible halo of stars — can be well explained by a single major merger with what was once the third-largest galaxy in the Local Group, M32p. This long-dead galaxy was at least 20 times as massive as any galaxy that has ever merged with the Milky Way. And, based on the study, its corpse is still likely traveling around Andromeda in the form of M32. “M32 is a weirdo,” said Bell. “While it looks like a compact example of an old, elliptical galaxy, it actually has a lot of young stars. It’s one of the most compact galaxies is the universe. There isn’t another galaxy like it.”

This graphic shows how the Andromeda galaxy shredded the large galaxy M32p, ultimately leaving a stripped galactic core known as M32, as well as a giant halo of metal-rich, intermediate-age stars.(Credit: R. D’Souza; M31, courtesy of Wei-Hao Wang; Stellar halo of M32: AAS/IOP) According to the researchers, this dominant-merger scenario also explains why Andromeda has a massive population of metal-rich, intermediate-age stars in its stellar halo, which would not be the case if the galaxy underwent sporadic bursts of star formation during multiple small mergers. Furthermore, a single large collision would explain why Andromeda possesses a thickened disk and experienced a significant burst in star formation about 2 billion years ago, when about 20 percent of its stars were born. “The Andromeda galaxy, with a spectacular burst of star formation, would have looked so different 2 billion years ago,” Bell said. “When I was at graduate school, I was told that understanding how the Andromeda galaxy and its satellite galaxy M32 formed would go a long way toward unraveling the mysteries of galaxy formation.”

This new results are important not only because they help shed light on the formation history of the largest galaxy in our local neighborhood, but also because they question conventional wisdom regarding how galaxies evolve following massive collisions. According to the researchers, the fact that Andromeda’s spiral disk managed to survive the impact means that galactic disks may be much more resilient to impacts than astronomers previously thought. By applying the same technique used in this study to other galaxies, the researchers hope to better understand how various mergers can drive the growth of galaxies throughout the universe. And considering that Andromeda is currently on a collision course with the Milky Way, which will lead to a merger between the two galaxies in about 4 billion years, the more we know about mergers, the better. [This post originally appeared on Astronomy.com]