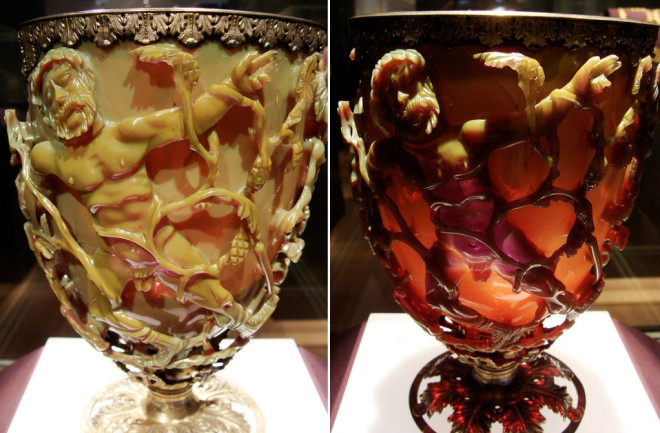 Anyone who lived through the 90s knows color-change technology—from T-shirts to free cereal spoons to doll hair—is nothing new. But it turns out even the ancient Romans had mastered the art of color-change, and to do so they relied on some pretty advanced feats of engineering.

The Lycurgus Cup is a 1,600-year-old glass chalice housed at the British Museum. Under normal light it’s a washed-out green color—but magically transforms to a blood-red vessel when lit from behind.

This color-change puzzled scientists for decades after the museum acquired the cup in the 1950s, explains Smithsonian Magazine:

The mystery wasn’t solved until 1990, when researchers in England scrutinized broken fragments under a microscope and discovered that the Roman artisans were nanotechnology pioneers: They’d impregnated the glass with particles of silver and gold, ground down until they were as small as 50 nanometers in diameter, less than one-thousandth the size of a grain of table salt. The exact mixture of the precious metals suggests the Romans knew what they were doing—“an amazing feat,” says one of the researchers, archaeologist Ian Freestone of University College London.

More recently, some researchers speculated that in everyday usage this may have meant that the cup changed color depending on what was put in it. Since the museum probably wouldn’t like you pouring your cereal in the goblet, the researchers instead re-created the cup’s material on a chip.When they poured solutions of water, oil, sugar and salt onto the surface the colors indeed changed markedly—light green for water and red for oil, for instance—according to research published earlier this year.

A color-changing goblet: You have to admit, that’s a lot cooler than, well, really anything that came out of the 1990s.