From cataract surgery to FDA-approved leeching, some modern medicine has unusual origins. 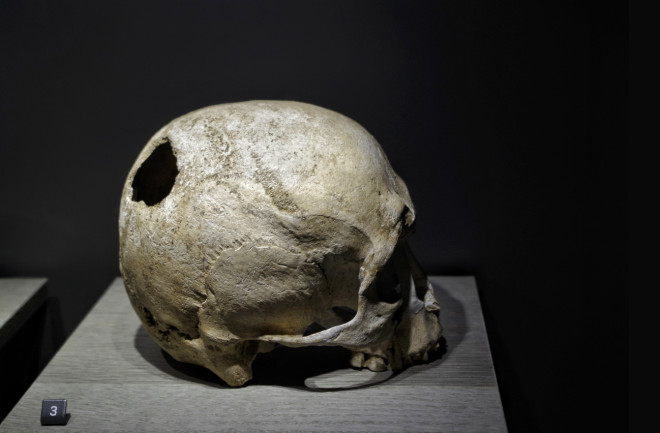 A skull, from the megalithic area of Saint-Martin-de-Corléans in Italy, shows traces of a trepanation surgical operation. (Credit: Stefano Chiacchiarini/Shutterstock)

Many medical treatments from throughout history are considered shocking, barbaric or just plain weird today. Cocaine is no longer used as an anesthetic, for example, and the bygone era of lobotomies is thankfully over. But others have stood the test of time — albeit with changed rationales for their use.

Here are five examples of age-old procedures that doctors still turn to today.

Considered one of the oldest medical practices, the removal of blood for health purposes was a go-to treatment for thousands of years. Bloodletting was (erroneously) thought to be one way of ridding the body of fluids, called “humors,” which supposedly made people sick when unbalanced. Leeches were eventually utilized in this procedure, and leeching became a highly favored treatment throughout Europe, Asia and America during the 1800s.

Leeches aren’t slugs, insects, or reptiles; they’re segmented annelid worms with hundreds of teeth, 32 brains, 10 stomachs and nine pairs of testicles. They also secrete a powerful anticoagulant, called hirudin, in their saliva. That means when a leech feeds on a host, a clot won’t form — allowing it to continue its meal unhindered. Bleeding usually stops two to three hours after the leech has finished.

Bloodletting eventually fell out of favor and, for the most part, so did leeching. However, leeches are still used in unique situations — such as when congested blood must be removed from a replanted body part. The leech essentially performs as an artificial vein that draws off excess blood until the patient can grow back venous capillaries of their own. In fact, the worms (along with maggots) were the first living creatures to be approved by the Food and Drug Administration for use as medical devices.

Read More: Leeches and Maggots Are FDA-Approved and Still Used in Modern Medicine

Electroconvulsive therapy, better known as ECT, is a treatment for severe depression or bipolar disorder. During this procedure, small electric currents are sent through the brain, triggering a short seizure believed to cause changes in the brain’s chemistry and relieve symptoms. Although approximately 100,000 people undergo the treatment each year, it’s still considered somewhat controversial.

Using electricity for medicinal purposes dates back to the ancient Romans, who used electric eels to treat gout and headaches. Throughout history, physicians have also applied electricity in cases of hysterical blindness, paralysis and epilepsy. The operating principle was that the electricity itself held curative properties — whereas modern ECT is based on the idea that the seizure is what produces results.

When people think of ECT, many conjure up the disturbing scene from the film One Flew Over the Cuckoo’s Nest. But ECT protocols have changed significantly since. The procedure is now done with the use of anesthesia and muscle relaxants, and the electric current is given in much lower doses.

A leading cause of blindness worldwide is cataracts, which affect 24 million Americans aged 40 and older. Ancient Indians developed the first documented treatment, called “couching,” to address cataracts as early as 800 B.C. During couching, physicians punctured the eye and manually dislodged and removed its cloudy lens. Unsurprisingly, this method often led to complications and bad outcomes — sometimes blindness.

Then, in the mid-1700s, French ophthalmologist Jacques Daviel made a major advance. Credited with revolutionizing cataract surgery, he performed a procedure using extracapsular cataract extraction (ECCE). Using instruments including a knife, blunted needle and spatula, he extracted the lens through an incision in the cornea. After surgery, the patient’s eyes were washed in water and wine and covered with cotton. For the following week, patients recovered by laying on their backs in a dark room. Daviel’s procedure built the foundation of modern cataract treatment and ECCE is still practiced today, although the procedure has been refined over time.

Transsphenoidal surgery is done to remove pituitary tumors. Located at the base of the brain, the pituitary is a pea-sized gland sometimes referred to as the master gland, due to its control over other endocrine glands. In modern times, the surgery is done by inserting a thin, rigid tube called an endoscope through the nose while the patient is under anesthesia — but it used to be a bit more brutal.

Pioneering ancient Egyptians employed transsphenoidal techniques in the preparation of mummies; they slid special instruments with curved hooks through the nostrils to remove brain matter from corpses. Modern medical innovators and neurosurgeons Harvey Cushing and Norman Dott later made advances and improvements to the procedure during the 1900s. With around 10,000 people being diagnosed with pituitary tumors each year, transsphenoidal surgery is the most common treatment.

Trepanation, the practice of drilling a hole into the skull, is perhaps the world’s oldest surgical technique. Many skulls, some 10,000 years old, recovered from the Neolithic and Mesolithic periods exhibit evidence not only of trepanation but of new bone growth along the edges of the hole — indicating that the long-gone patients survived. It was thought by the ancient Egyptians to relieve conditions such as headaches, epilepsy, mental illness or cranial trauma. They also believed that a hole in the skull allowed evil spirits to leave the person they were inhabiting. Others practiced the technique as well, including the ancient Greeks, ancient Chinese and ancient Romans.

Trepanation was a precursor to modern neurosurgery and is still practiced today — although the tools have advanced from the rudimentary trepans used hundreds of years ago. Today, neurosurgeons make a burr hole in the skull, which exposes the dura mater. It is sometimes done to relieve pressure in situations such as subdural hematoma or hydrocephalus. Craniotomies , during which a piece of skull is removed and eventually replaced, are more now common. Some people have even practiced self-trepanning, believing it would relieve physical ailments, while others have done the same in the name of spiritual enlightenment.

More From Discover
Mind
Who Were The Boskops And Were They Really Smarter Than Us?
Mind
What's The Spooky Science Behind The Ouija Board?
Health
How Poisonous Chemicals Created The Phrase 'Mad Hatter'
Mind
Why The Paranormal And Supernatural Continue To Fascinate Us
The Sciences
5 Actresses Who Have Also Worked As Scientists
Health
What Happens To Your Brain When You Stop Drinking?
Recommendations From Our Store
My Science ShopDiscover STEM Kits
My Science ShopDiscover 2022 Calendar
My Science ShopStrange Science
My Science ShopElements Flashcards
Shop Now
Stay Curious
Join
Our List