The only two living animals approved as medical devices in the U.S. have ebbed and flowed in usage. Some practitioners and patients swear by the results. 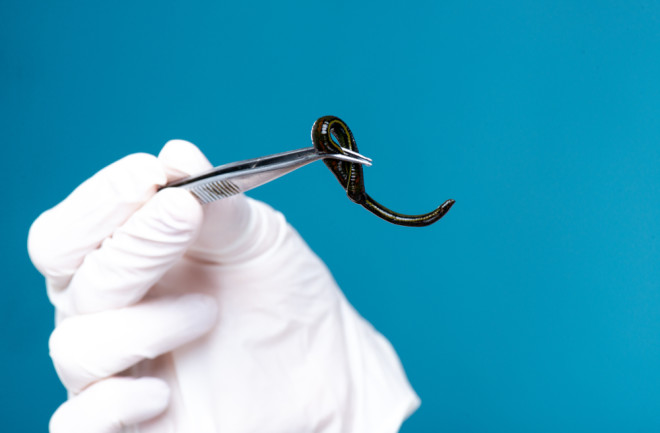 The course of modern wound care changed one day in the late 1980s because a medical resident at the University of California, Irvine, named Ronald Sherman wore a butterfly-patterned tie. The chief resident of plastic surgery noticed it, recalls Sherman. “He said, ‘Do you know anything about bugs?’ I said, ‘Yeah, I was an entomology major.’ He said, ‘Ever heard of maggot therapy?’”The rest became creepy-crawly history that’s ended up saving countless lives and limbs: a resurgence of therapy using maggots and leeches, which are the only two live animals FDA-approved as medical devices.

Using maggots and leeches on the human body goes way back — the ancient Greek physician Galen referenced them more than two thousand years ago. Striped barber poles, in fact, are a callback to the good old medieval days when you could get some bloodletting done in the same trip to get a haircut. The ball at the top of the pole is said to symbolize the bowl the leeches were kept in, and the one at the bottom is the basin that blood drained into. But the roles of these creatures in modern medicine is a little more refined and tailored to their biology.

The maggots used in medicine are the larvae of shiny, bottle-green blowflies. They hatch from eggs laid on rotting meat, which they promptly tuck into, spitting digestive enzymes onto the meat to liquify it. Then they slurp it up like a rotten meat milkshake. They don’t eat healthy living tissue, which Sherman notes might be because healthy tissues have functional cell membranes that resist the digestive juices. After about three days, once the maggots have quintupled in size to reach the length of a staple, they pupate (the fly version of making a cocoon) and then reemerge as adults.

Since maggots voraciously guzzle down dead tissue, while not bothering the healthy stuff, they’re useful for cleaning infected wounds. “They will totally dissolve and eradicate that dead tissue, cleaning up the wound so that it can go on to heal,” says Sherman, now a physician and the director of the BioTherapeutics, Education and Research Foundation. The nonprofit provides resources for therapists and patients pursuing biotherapy with leeches and maggots. (Since the creatures are feeding on dead tissue that’s often already numb, it doesn’t hurt.)

Leeches are water-dwelling worms with tri-part jaws arranged in a triangle, which latch onto prey to drink blood. To make the job easier, the creatures inject an anesthetic agent to numb the area and an anticoagulant to increase blood flow. Leeches were once used for medical conditions like fevers, when that symptom was incorrectly attributed to excessive blood or an imbalance of the apocryphal four humors in a human. Based on updated medical research, their blood-draining skills are now used to clean up pooled blood in the body. When blood starts pooling instead of circulating, the area swells, and the lack of fresh, oxygenated blood causes skin tissues to die. Leeches can prevent that from happening.

Despite their different uses, both animals’ medical fates are linked by their similarities. They are critters that clean up wounds by eating flesh and blood. And their popularity in the medical field, often mirroring each other, has risen and fallen over the years.

Maggots were booming in the early 20th-century, when William Baer, an orthopedic surgeon at a children’s hospital in Baltimore and Johns Hopkins University, used maggots to clean the wounds of children with infections caused by tuberculosis. Baer got the idea from his time in World War I, when he saw soldiers with maggot-infested wounds fare better than their comrades with “clean” wounds. Maggot therapy rose in popularity for a few decades, but as antibiotics became available, there were fewer unhealable wounds that required maggots to remove dead tissue. In U.S. hospitals, maggots and leeches succumbed to what Sherman calls “the yuck factor” — administrators deemed them unsanitary and just plain gross, so they were used less and less.

Return of the Maggots

By the time Sherman and his butterfly-patterned tie came onto the scene in the 1980s, maggots and leeches were largely seen by American doctors as a thing of the past. But as medical interventions made once-deadly conditions survivable, and bacteria evolved new strains that resisted antibiotics, an influx of wounds wouldn’t respond to treatment. So, doctors like Ed Pechter, the chief plastic surgery resident at the University of California, Irvine, began looking to the past. Since Sherman’s tie marked him as an insect enthusiast, Pechter recruited him to help with a historical review of how maggots were once used to treat hopeless wounds. From then on, Sherman was hooked like a maggot’s mouth to decaying flesh.

He continued pursuing the subject, but some of the hospital administrators he encountered were skeptical of his requests. They told him, “If you can find one patient who is willing to have maggots on, we’ll let you do it. Here, talk to anybody you want to on this ward,” he says. So, he visited the spinal cord injury patients at a Veterans Association (VA) hospital.

The first patient Sherman spoke to — after the patient detailed his injuries and failed treatments — said to Sherman: “You know, years ago, they used to use maggots to treat wounds. How come they don't do that anymore?” Sherman recalls. “I said, ‘Whoa, that’s interesting you should ask.’” The man decided to give it a shot.

The next patient he spoke to also quickly agreed to try maggot therapy. Their enthusiasm might seem surprising, but Sherman explains that the patients are coming from the context of trying to fix “a stinking, draining, activity-inhibiting, often limb-threatening wound.” In that context, some baby flies painlessly munching on your wound while hidden under a bandage might be less of a big deal.

Sherman continued his studies, and word got around that he was the man with the maggots. In order to legally share maggots with his fellow physicians and therapists, he had to file maggots with the FDA.

“It took them a year and a half to determine how they could possibly regulate maggots. Is it biological? Is it a drug because they're secreting these enzymes? Is it a device because they're crawling around the wound?” Sherman says. In 2003, the FDA approved maggots as a medical device. The FDA regulation of leeches followed six months later, in 2004.

The use of maggots and leeches as biotherapeutic devices, says Sherman, has worked like gangbusters. He notes that hospitals are still sometimes shy about publicity around the creatures, so it’s hard to get precise numbers. But maggots and leeches have helped countless patients. (It’s worth noting, too, that they’ve remained popular in other parts of the world throughout the 20th-century.) Anecdotally, patients today seem as eager to try them as Sherman’s first test subjects back at the VA hospital.

Podiatrist Ravi Kamble recalls a patient with a gangrenous foot, an untreatable infection that spread to the bone. It seemed like his only hope for survival was amputation.

“I still remember this guy, and he was in tears. He said, ‘Please, I will do anything, anything you want. I just want to save this leg,’” recalls Kamble. He says he danced around the word maggot when telling the patient his treatment plan, but the man was a high school biology teacher and was a step ahead when Kamble obliquely referenced biotherapy: “He says, ‘Oh, you mean maggot therapy? I’m totally down. Let’s do it.’”

Aletha Tippett, an Ohio-based physician, works extensively with leeches and maggots. “I always present them as friends,” she says. “They're our friends and they're going to help us. I've had patients name their maggots, [they] begged [me] to help put them on and take them off.” And the fondness doesn’t end after treatment. Maggots and leeches are supposed to be disposed of after interacting with a patient’s blood, but Tippett says her patients have argued against that: “‘Well, they saved my leg, I can’t kill them.’” So, instead they let them go alive.