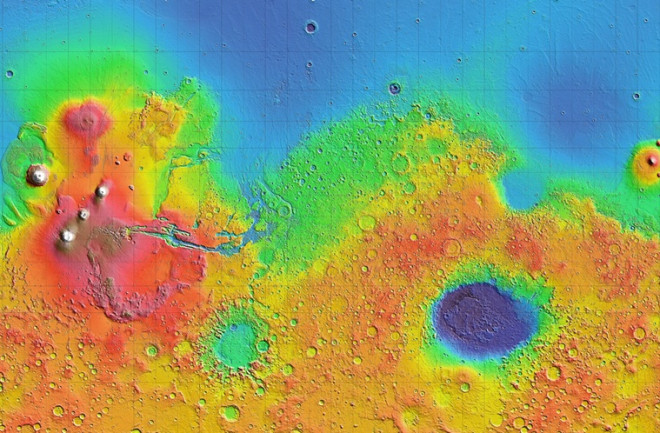 Three and a half billion years ago, an asteroid slammed into Mars. The cataclysm wasn’t terribly unusual for this period in the solar system’s history, but the fallout would leave its mark. The asteroid carved out an enormous crater. It also sent a wall of water a thousand feet high hurtling around the young Red Planet, which was much more blue at the time.

That wave then slammed into land, creating strange landforms on Mars. Since 2017, Francois Costard, a scientist at the French National Centre for Scientific Research, has been advocating this theory to explain a region called the Thumbprint Terrain, and now he thinks he may have found the crater that was ground zero for the tsunami. He published his findings June 26 in the Journal of Geophysical Research Planets.

Mars’ thumbprint terrain might be the site of an ancient tsunami striking the shoreline. (Credit: American Geophysical Union)

Back in 2016, a separate group of astronomers put forward the theory of an ancient mega-tsunami caused by an asteroid impact – two tsunamis, in fact. The theory is based on visual inspection of some of Mars’ stranger features, which Costard says could only have been made by a giant tsunami slamming into shore and then washing back over the landscape.

Costard picked up on the hypothesis, studied the resulting Thumbprint Terrain, and traced back the direction the tsunami would have originated from. From 10 possible impact craters that fit the size and location criteria, Costard zeroed in on Lomonosov Crater. This impact site is the right age (about 3 billion years old), it’s large enough (75 miles across), and its shape implies it was under water at the time of impact.

Beyond revealing the true nature of the Thumbprint Terrain, scientists are interested in the tsunami explanation because of its implications for Mars’ ancient oceans.

The standard timeline is that Mars lost its water-world status closer to 3.7 billion years ago, not long after its core cooled and then solidified and its magnetic field disappeared. That in turn allowed solar particles to strike Mars’ atmosphere and strip away the protective gasses. Without an atmosphere, Mars couldn’t retain surface water, which should have disappeared in relatively short order.

However, scientists keep turning up new evidence that Mars somehow clung to huge amounts of water long after its magnetic field collapsed, perhaps even into the last billion years. Scientists aren’t sure how Mars could have stayed so wet without a protecting atmosphere, but the signs keep piling up. This Thumbprint Terrain that fascinated Costard is just the latest tantalizing sign. It’s on the edge of a vast low-laying plane that many scientists think might once have been a giant northern ocean.

If Costard is correct about the Lomonosov Crater’s asteroid, that means Mars still had a whole ocean to give rise to the tsunami about 3 billion years ago. It adds one more piece of the puzzle to when Mars changed from a water world to the Red Planet we know today.