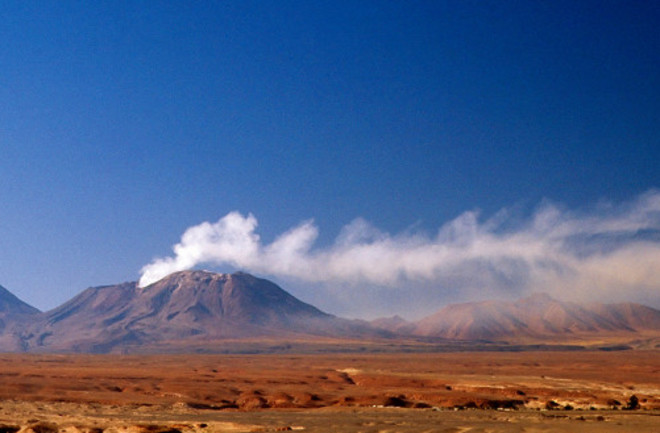 Volcan Lascar Spews Ash into the Atacama Sky. Ed Darack/Alamy Lascar, in the northern Andes of Chile, erupted unexpectedly today, producing a small plume of light grey ash that reached 2.5 kilometers (~8,200 feet) above the volcano (see above). The fact that there seemed to be little in the way of precursory activity (earthquakes, increased gas emissions) from Lascar suggests that this blast may have been a phreatic explosion driven by water flashing to steam in the volcano's summit crater or conduit. Due to this minor eruption, the SERNAGEOMIN has raised the alert status at Lascar to Yellow, although the volcano is in a fairly remote part of the Chilean Andes---the Global Volcanism Program reports only ~8,100 people living within 100 kilometers (62 miles) of Lascar. It has been over 2 years since Lascar last did anything and its last major eruption of Lascar was in 2005. However, it has produced some spectacular eruptions in the recent past, including the 1993 eruption that was a VEI 4. As with any of these small blasts, volcanologists will watch Lascar to see if this is a sign that it is awakening or merely a blip. Based on images on the Lascar webcam, the eruption appears to have waned rapidly (see below).

The light grey, ash-rich plume from Chile's Lascar during its minor October 30, 2015 eruption. SERNAGEOMIN webcam The SERNAGEOMIN maintains two webcams pointed at Lascar, although only one is running right now.