An Electrical Fire May Have Sparked a Mini-Volcano in Iraq 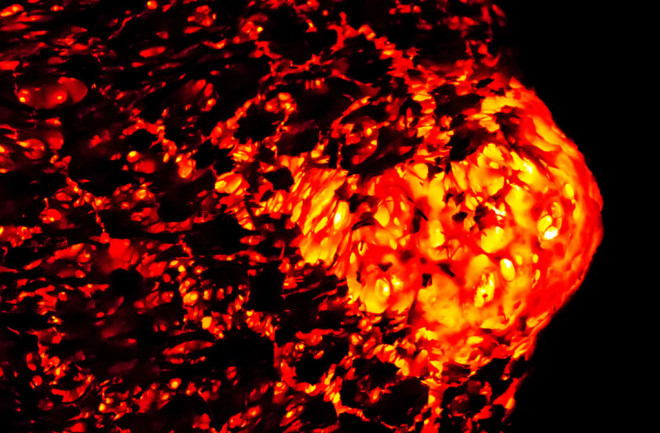 Getty Images Every once in a while, we get some truly strange "volcano" news. This would count as strange: In Kirkuk, Iraq, video was captured of a "mini-volcano" appearing underneath a house (see below). The "eruption" was small, maybe a foot or two across with spattering lava and fumes. Al Arabiya reported that this pit of molten rock may have been created by an electrical fire underneath the building. The video shows that the ground isn't merely hot but actually molten.

If you're thinking "that's impossible", consider this: Electrical fires and arcing can reach temperatures of over 3000ºC

. If you even had a sustained electrical fire under the building that reached 1000-2000ºC, the quartz-rich, sandy material (especially if calcite is mixed with it, which is common in this area) under and next to the house could melt---you only need to get the material to maybe 1000-1500ºC (and keep it there for awhile) to melt sand, as they do to make glass. There really isn't a geologic way to make a mini-volcano like this; to sustain molten rock (magma) underground, you need a lot of it. This bucket full of lava is likely to solidify very quickly once the source of the heat (the electrical fire) is removed. Tectonically, Kirkuk is nowhere near any known volcanic provinces. You'd like need to travel into northern Iran

before you reach any potentially active volcanoes. The area around Kirkuk is known for its oil fields, but to have subterranean fires related to hydrocarbons, you really need coal, not oil. Underground coal fires can burn for decades, but they burn at 150-250ºC range

, much too low to melt sand or rock. This isn't the first time humans have made their own lava. Sometimes it can be by accident, like the "corium" flow that formed during the meltdown at Chernobyl in 1986

. That was caused by the heat from the radioactive elements in the reactor melting the casing around the containment unit. In a little safer endeavor, artists and geologists at Syracuse University have been making their own lava flows

for years now by melting chips of volcanic rock in a cauldron typically used to melt metal. They have been able to mimic a wide variety of lava flows and test how lava flow behaves as it moves over all kinds of lava surface like snow, ice, or wet sand. Not as strange as an accidental mini-volcano, but still pretty cool.