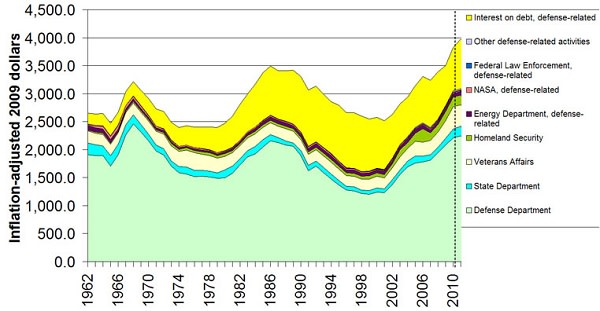 Time has a worthwhile piece up, How to Save a Trillion Dollars

. One thing the author brings up in relation to our exorbitant military spending is that in certain sectors the lead of the American armed forces technologically is such that we do not to need to significantly upgrade our matériel for a generation to maintain at least a marginal level of superiority. The F-35

is clearly superior to the F-16

, but is it worth it to increase the gap between our air superiority and our nearest competitors at $125 million per unit cost? Not only that, but the American military clearly "sets the curve," so that the more we invest in our own technological superiority, the more our rivals will have to invest so as to "catch up" and keep the gap relatively constant. The reality is that basically developed nations just need to be advanced enough that they can pummel the leaders of select lesser nations, such as Libya or Ivory Coast, and, have a military beefed up enough to be respectable in the eyes of their peers. An "arms race" between developed nations is not necessary for either of these.