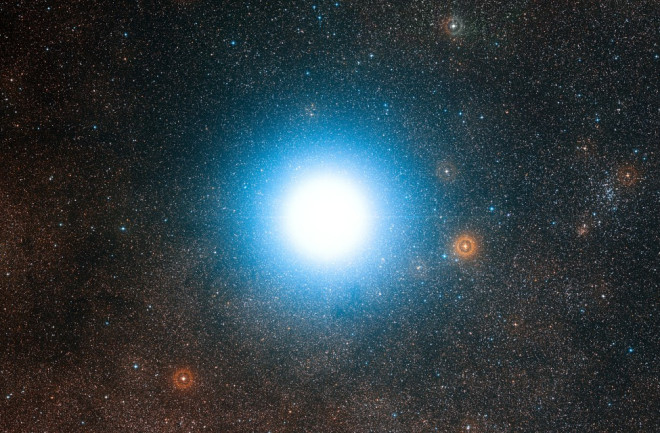 (Credit: Wikimedia Commons) With the announcement today of an Earth-sized planet orbiting in the habitable zone of Proxima Centauri, Earthlings' attention is focused once again on our nearest stellar neighbor. The Alpha Centauri system is located some 4 light years away from Earth, which places it right in our backyard, cosmically speaking, even though it still lies roughly 25 trillion miles away from us. Spotting an exoplanet around Proxima is a huge discovery scientifically speaking, but it's all the more exciting given the cultural significance of the Alpha Centauri system. In a way, it validates the speculations of dozens of authors, directors, comic book artists and game designers who dared to dream of life somewhere out there. We don't know if anything actually exists — or even can exist — on the planet, named Proxima b, but the discovery will no doubt fuel the imaginations of a new generation of science fiction writers whose ideas now have evidence to back them up. In honor of our newest stellar neighbor, we take a look at the many ways the Alpha Centauri system found its way into works of science fiction over the years.

In James Cameron's 2009 blockbuster, humans have traveled to the Alpha Centauri system in search of valuable minerals after exhausting Earth's resources. They land on Pandora, a jungle-dense moon orbiting a gas giant in the system rumored to have vast stores of unobtanium, a rare superconducting metal. The world is populated by the Na'vi, a race of giant, blue-skinned warriors living peacefully on the moon and whose settlement just happens to sit atop an unobtanium mine. Avatar is currently the highest-grossing film of all time, and a sequel is set to be released in 2018.

As the nearest star system to us, Alpha Centauri would be a natural choice for us to prospect for resources — if we could ever get there. If the highly-publicized Starshot endeavor launches later this century, we might get a glimpse of what this star system has to offer.

Liu Cixin is a Chinese science-fiction writer (and full-time engineer) whose recent trilogy "Remembrance of Earth's Past" has become a best-seller in China. The first novel in the series was translated into English in 2014 and won the 2015 Hugo Award. The first book, called "The Three-Body Problem", concerns a race of aliens who live in a triple star system near Earth that's based on Alpha Centauri. In the novel, unlike in reality, the star system is unstable, and the erratic orbits of the three stars wreak havoc on the Trisolaran's home world, making it nearly impossible to inhabit. To solve their problem, the aliens decide to pack up and move, and after intercepting a signal from Earth, they decide our home world is the best place to go. The novel uses China's Cultural Revolution as context, and details the struggle between two groups of humans: one who believes that we might just be better off with new extraterrestrial overlords, and another trying to stop them and preserve our freedom. While the actual Alpha Centauri system may not be subject to unpredictable orbital dynamics, the so-called "three-body problem" has enjoyed a long history in the world of physics. Two bodies in motion relative to each other, as with the Earth and the Sun, or a binary star, follow relatively stable, predicable orbits. Throw another object into the mix, especially one with a comparable mass, and the motions of the system go all out of whack. The problem is infamously difficult to solve, and has attracted the attention of physicists and mathematicians for centuries. In the real world, while Alpha Centauri may be a triple star system, Proxima Centauri is so far away that it orbits the larger binary system as if it was just one large mass.

Michael Bay introduced moviegoers to those giant robots battling over Earth while masquerading as fire trucks and muscle cars. While their seemingly unfounded fixation on Earth may take up the bulk of the series, the Transformers were actually once Alpha Centaurians. Their homeworld, Cybertron, was originally part of the star system, but a cataclysmic battle between the benevolent Autobots and war-hungry Decepticons knocked the planet from orbit and sent it careening toward Earth, where the rest is history. Alpha Centauri doesn't play much of a role in the series at large, but it does illustrate another use for the star system. As a recognizable point on the infinite map of the universe, pinpointing "Alpha Centauri" as the home planet of an alien race, or giant robots as the case may be, lends it an air of familiarity while also granting it more specificity than, say, "In a galaxy far, far away..."

Mary Doria Russell's 1996 novel is a morally complex tale of first contact with aliens in which we are neither the invaders nor the victims, but rather misinformed though well-intentioned ambassadors. The book's protagonist is a Jesuit priest who journeys to the Alpha Centauri system after Earth picks up on an otherworldly musical transmission. Along with his team, he is both missionary and something of a spiritual torch-bearer for the white man's burden. Predictably, their efforts misfire terribly, and he returns to Earth as one of the only survivors, scarred physically and broken psychologically. The narrative unfolds through a series of flashbacks he shares after his return. Rather than epic struggles between species, "The Sparrow" offers a nuanced look at the sociological repercussions human settlers could bring about. It follows in a rich tradition of speculative fiction that uses alien races and far-off planets as vehicles to explore cultural relativity and the difficult choices that arriving on another planet could very well entail. As with the Transformers, Alpha Centauri here is just a convenient place for humans to go, and becomes the backdrop for Russell to take on our sometimes naïve notions of what it means to be a galactic settler.

Robot B-9 and Jonathan Harris as Dr. Smith on the set of "Lost in Space." In this television series from the 1960s, the Robinson family has been selected to boldly go where no family has gone before on our first mission beyond the solar system. They aim for Alpha Centauri, but a meddling foreign government agent disguised as a doctor throws them off course and they wind up wandering through the cosmos. The series ran for three seasons, and famous lines from the show's robot, like "Danger, Will Robinson" and "That does not compute", would end up being some of the most memorable elements of the show. In addition, the Lost in Space was one of the first science-fiction shows to air on network television, and would set the stage for more ambitious projects to come.

Spock and Captain Kirk in this press photo from the original series. Finally, we have to give a nod to what is almost undoubtedly the most iconic science-fiction show of all time. Star Trek most often concerned itself with worlds much further away than Alpha Centauri, but the star system does play a role in one of the more important elements of the canon. For a brief time, the system is said to have been the home of Zefram Cochrane, the inventor of the warp drive and the first human to exceed the speed of light in 2063. This piques the interest of the Vulcans, and our introduction to the wider galaxy follows. Cochrane was something of an anti-hero, and seemed to mostly be after women and alcohol, according to the show's backstory. He emigrates to Alpha Centauri in his later years, and eventually leaves the colony to die among the stars. But that's not the last we see of him: Captain Kirk later runs into him under some fairly unusual circumstances, but he at least seems to be finally at peace.