Aliens, Comets or Crap? What’s Going On With The Wow! Signal? 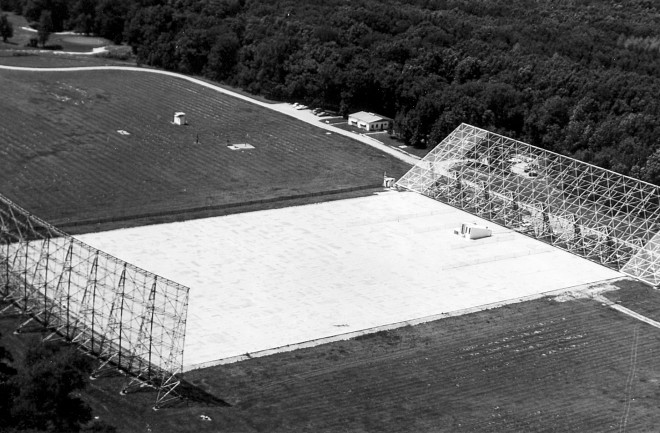 Ohio State University's Big Ear Observatory caught one of the most promising SETI signals ever back in 1977. Astronomers are still debating if it came from aliens, or something closer to home. (Credit: NRAO/AUI/NSF) In 1977, Ohio State University math professor Jerry Ehman walked into the Big Ear Observatory and looked over the past few nights’ observations. At the time, the radio telescope was the only observatory exclusively devoted to the search for extraterrestrial intelligence (SETI). It also was underfunded and had no full-time staff. That means no one was listening for aliens the night SETI had its closest call with the big one. On the night of Aug. 15, 1977, a 72-second signal arrived from deep space just at the right frequency astronomers believe aliens would use. Since no staff members were around, no one could alert other telescopes to listen in. Without tying the radio signal to an object in the night sky, they couldn’t tell how far away it originated, Ehman told me last fall. All Ehman could do was scribble “Wow!” on the data printout and hope the signal from Sagittarius would repeat. It never did. But Antonio Paris, an astronomy professor at St. Petersburg College in Florida, thinks he has the solution. Two comets passed by that region of the sky in 1977, according to his hypothesis. And this year, those comets passed by again. That created a chance to test his theory. His research was accepted for publication in the Journal of the Washington Academy of Sciences. (A preprint is available on Paris’ site.)

The comet 266/P Christensen is the one in question. Its orbit roughly aligns with Jupiter at its farthest distance and Mars at its closest to the Sun. According to Paris’ research, the comet “transmitted” at the 1420.25 MHz radio band. That’s near where the Wow! signal came from. “We did everything we could to try to debunk our results but we kept getting a signal from the comet,” Paris told Discover. “That was when we said, 'Eureka!' ” Paris, who along with his teaching duties runs the Center for Planetary Science and the UFO-hunting Aerial Phenomena Institute, proposed the hypothesis last year. Ehman scrutinized that original proposal, and didn’t believe it was likely to be comets. “I received a copy of their article from the Journal of the Washington Academy of Sciences and I studied it carefully,” Ehman said in an interview at the time. “I have concluded that neither of the two comets could explain the Wow! signal, and colleagues of mine at the observatory have also concluded the same thing.” Indeed, peer reviewers on Paris’ paper remarked on the need to coordinate with Ohio State and others on the research, seeing that as one of the flaws in the paper. “The only response from the peer review that we were concerned about was that no one, including Ohio State University, had previous research on detecting a signal from a comet,” Paris says. “We had to explain to the peer reviewers that we were the first to do so ... thus no previous data was available.” Chris Lintott, a professor of astrophysics at Oxford University, isn’t buying any of the explanation. “If real, this comet is detectable in the radio,” Lintott says. “But the signal isn't bright enough or rapid enough to be a good fit to the Wow! signal.” The methodology itself is flawed, according to Lintott. While staring at this region of the sky, he says there should have been about five minutes’ worth of signals if it were comets, but it only comes in intermittent bursts. And if it were comets, Lintott says we could expect to see Wow! signals all the time, rather than once in 1977 and once in 2017. Then there’s the choice of journal — in his words, “it's not somewhere astronomers publish.” Lintott has another problem with Paris’ research: He crowdfunded it. “Bad papers get written and published all the time,” he says. “But this author asked people for money to fund his research, and if you do that you should hold yourself to the highest standards.” Lintott isn’t sure what it is. But comets it ain’t. “I don't know what the Wow! signal was — it's very hard to study something you've only seen once,” he says. Lintott suggests the study authors submit their research to one of the larger astronomy journals so they can get constructive feedback. “This is just science by press release, and it’s depressing it’s picked up (by the press),” Lintott says. Paris is aware of the criticism he’s receiving and believes his paper still stands up to scrutiny. “I see one or two astronomers are skeptical. They emailed me, too,” he says. “But they can't answer my question: Show me the evidence to refute my data. They might need to do some soul searching.” For his part, Ehman remains (relatively) agnostic on the original signal, while wanting to believe the extraterrestrial cause. He acknowledges that limited equipment of the time led to a sort of dead end to the mystery. “It’s an intriguing possibility that it’s a signal from extraterrestrial intelligence, but it’s also one that I’ve had to declare that I can’t prove that it is, or prove that it isn’t,” Ehman says. So I guess that makes two things now that some people think are aliens and others think are comets. There’s now a possibly plausible explanation for the Wow! signal, but that won’t stop SETI researchers from continuing to look for something just like it, hoping for that needle in the haystack that proves we’re not alone.