Making Sense of the 'WTF' Star 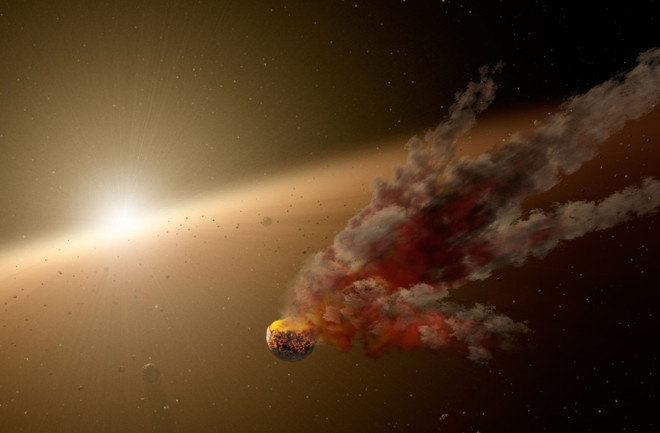 The WTF star’s odd light levels could be due to an asteroid-planet collision, as in this illustration. (NASA/JPL-Caltech)

If you are trying to understand the universe, one is not merely a lonely number; it is a damn infuriating one. When you have just a single example of an object to study, you cannot tell if it is an oddball or the archetype of a whole population. It would be like trying to understand all of humanity from a single person. The universe would have to be pretty cruel to mess with you like that.

But sometimes the universe really is that cruel, as Tabetha Boyajian can testify. Last fall, as a researcher at Yale, she reported a pattern of bizarre behavior by a star known as KIC 8462852. KIC stands for Kepler Input Catalog, meaning that the star was among the 150,000 studied by NASA’s planet-hunting Kepler space telescope. This one is not like any of the others in the catalog, however.

Over four years, KIC 8462852 repeatedly and inexplicably dimmed, then brightened again. The flickering is irregular, so it cannot be the shadows of planets passing in front of the star. The star itself is calm and stable. It’s a mature object, not surrounded by the clumps of light-blocking debris that accompany stellar infants — and yet overall it has grown fainter over the past four years. “Everything we learned about the star made it even more difficult to understand. It doesn’t fall into any known category,” Boyajian says.

She huddled with a group of collaborators and considered all kinds of possible explanations. Their wide-ranging list included colliding asteroids, a shattered planet and a swarm of comets. Then a group led by Jason Wright at Penn State offered an even more exotic possibility: We might be seeing the silhouette of an enormous artificial structure. Breathless news stories were calling KIC 8462852 the “alien megastructure” star. Boyajian prefers the marginally more sober name “WTF star,” where WTF allegedly stands for “where’s the flux?” But in fact we cannot rule out aliens, simply because we know so little. One object, one set of observations.

“I have a love-hate relationship with this star,” Boyajian confesses. “It’s very exciting, but it’s very frustrating at the same time.”

Public Offerings Boyajian can at least take some solace that she is hardly the first astronomer to encounter a singular astronomical mystery. In 1977, an astronomer at Ohio State University observed a strange and shockingly powerful radio burst, dubbed the “Wow! Signal,” which was considered a possible alien broadcast. Nothing like it has shown up since. In 1991, a team in Utah picked up a one-off cosmic ray so energetic that physicists still cannot account for it. It has been nicknamed the “Oh My God Particle.” Scientists are used to persisting for decades, if necessary, to collect the data needed to make sense of these solo acts.

In addition to the historical precedent, there’s also an important cultural shift working in Boyajian’s favor. The WTF star may be alone, but the researchers studying it are definitely not. From the very start, this latest discovery was the result of a large public collaboration.

Since 2010, a citizen science group called Planet Hunters has been helping to sift through the torrent of data beaming back from Kepler. They have been looking for signs of planets around other stars, but also discarding false signals while keeping an eye out for anything genuinely strange. More than 300,000 amateur astronomers have participated in the Planet Hunters project. The most experienced users have become highly sophisticated in reading the data.

“To be honest, it was the volunteers who found this star,” Boyajian says. “When they pointed it out to me, my first reaction was, ‘The data’s bad.’ I wouldn’t have given it a second look if it wasn’t for someone saying, ‘We did these preliminary tests, and [it] checks out.’ ” Plainly put, nobody would know about this one-off object if not for the wisdom of the Planet Hunters.

Now that Boyajian knows that the WTF star is uniquely strange, that large, engaged community is coming to her aid again. One of the greatest challenges in making sense of one-off objects is getting more data. If you don’t know what you are looking at, it is very hard to book telescope time or to secure funding for more studies. A proposal to study a mysterious object, with no guarantee that the effort will pay off at the end, is not very appealing to agencies like the National Science Foundation, which expect well-defined goals and concrete results from the research projects they support.

But ever since the aliens-themed news reports broke last fall, “I’ve been getting tons of emails from people asking how they can contribute,” Boyajian says. She gave a TED lecture and even more offers poured in. To tap into all that enthusiasm, she launched a Kickstarter campaign, which ended up raising more than $107,000. The money allowed her to establish a yearlong observing campaign, now underway, on the privately run Las Cumbres Observatory Global Telescope Network.

It’s unlikely that any public observatory could provide the kind of long-term, round-the-clock monitoring needed to scrutinize the WTF star for more strange behavior. It’s even less likely that any public institution could deliver funding just one month after a request — assuming any would even consider a long-shot campaign to see what the star will do next. And Boyajian notes that the open nature of a Kickstarter campaign is the antithesis of how traditional grants work; keeping the public involved is not just a possibility, it is a requirement.

Answers and Questions After a quarter-century, the Oh My God Particle still defies explanation, and some researchers now suspect it might have been the result of a measurement error. The Wow! Signal, too, remains a cold case file, though Antonio Paris of St. Petersburg College in Florida now theorizes that it might have come from a pair of passing comets and their attendant hydrogen clouds. He plans to put that idea to the test by refurbishing a 10-meter radio telescope to observe the comets as they pass through the area where the signal originated. Tellingly, the funds to do so are coming from another crowdsourced campaign, via GoFundMe.

As for the WTF star, more information — and maybe some bona fide answers — will be coming soon. The Las Cumbres network will monitor the star’s light level continuously through the latter half of 2017. “We want to see it dip again — it’s as simple as that,” Boyajian says.

If the episodes of dimming repeat, that would indicate an object in orbit, circling again and again. Breaking the star’s light into a spectrum will reveal the nature of the obscuring object or objects — whether they are loose and dusty or solid and sharp-edged, for instance. And before you ask: No, the observations will not be able to prove that we are looking at an alien megastructure.

More likely, Boyajian thinks, it is an unusual type of comet swarm, perhaps unleashed by some catastrophic event. It’s not exactly in the same league as spotting E.T.’s orbiting shipyard, but finding a distant solar system in a rare moment of crisis would still be an unprecedented, exciting discovery.

Boyajian notes that Kepler examined less than 1 percent of the sky. Maybe the WTF star is not unique after all, or maybe there are other stars that flicker in a totally different way, ending up in their own category of one. But one thing is certain: When the next oddball shows up, the scientists trying to make sense of it will not be working alone.

[This article originally appeared in print as "Party of One"]