Alert Raised as Explosions Rock Mayon in the Philippines 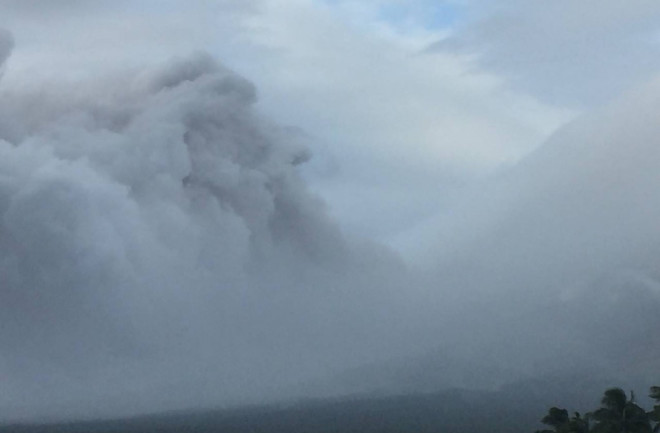 Ash billowing after a phreatic (steam-driven) eruption at Mayon in the Philippines on January 13, 2018. PHIVOLCS. Mayon in the Philippines hasn't erupted since 2014, but it appears that it is waking up from its brief slumber. PHIVOLCS raised the alert status at Mayon to Level 3 (on a scale of 0-5) after a weekend of steam-driven (phreatic) eruptions and hundreds of earthquakes. This change in alert level came with a mandatory evacuation of people living within six kilometers of the volcano and seven kilometers from the southern side because of the potential for rock falls and pyroclastic flows. Schools in the area have also closed due to the new eruptive activity. The latest PHIVOLCS report also mentions that a strong glow was observed at the summit crater and a new summit dome and small lava flow on the southeast flanks. UPDATE 1/15/2018 8:00 AM: PHIVOLCS released a picture that shows the long lava flow and glowing rockfalls on the flanks of Mayon (see below). Over 9,000 people have been evacuated from the area near the volcano so far and more could come if the eruption worsens. Some flights have been canceled as well due to the activity at Mayon. PHIVOLCS also maintains a webcam pointed at Mayon, although the weather makes it difficult to see much of the volcano right now.

Mayon is an especially hazardous volcano as over 250,000 people live within 10 kilometers of the volcano. Of course, only last week a number of pieces of monitoring equipment were stolen from Mayon. Lava flows are common at Mayon, but so are more explosive eruptions and pyroclastic flows, so there are a multitude of hazards that could impact the area. Add to that the threat of volcanic mudflows (lahars) that could occur if it rains after/during an eruption. Of course, only last week some equipment needed to monitor the volcano was stolen

. This makes it harder for volcanologists to keep track of things like earthquakes and deformation at the conical volcano. Elsewhere, the eruption of Kadovar

. Seven hundred people have been evacuated to the mainland so far as new explosions and a lava dome

have been seen at the island volcano. PNG officials have also ordered the evacuation

for fears for volcanic eruptions on that island only 12 kilometers from Kadovar. However, it is unclear if there are any signs that Bam could erupt for the first time since 1960 or if officials are more concerned with the threat of tsunami generated by Kadovar. Blup Blup, another nearby island, will also see its 2,000 residents evacuated. The plumes of steam and ash have reached a few thousand feet, which still remains a threat to produce a larger explosive eruption or pyroclastic flows that could run into the sea. New footage of Kadovar show

the tall, dark-gray plumes from the erupting crater and much of the island has been stripped bare by the rockfalls, pyroclastic flows and ash fall. Oddly, officials have seen discoloration of the water near Kadovar, which could suggest that there might be submarine eruption occurring, although it could be from material from the island eruption meeting the sea around the island. This happened during a period of unrest near Kadovar on 1976

, so it might be related to changes in the hydrothermal system for the volcano. Finally, Agung in Indonesia looks like it is still on the cycle of explosions. On January 12, the volcano produced a new blast that reached 2.5 kilometers