Alaska's Volcano Cools Down, While a Chilean One Heats Up 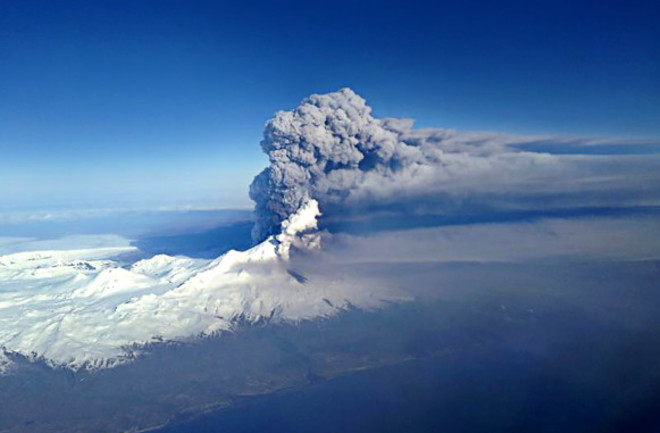 The Pavlof Volcano spews ash in the Aleutian Islands of Alaska on March 28, 2016. US Coast Guard/REUTERS The eruption that started Sunday at Alaska's Pavlof has abated after over 24 hours of intense activity. The Alaska Volcano Observatory lowered the area's alert status to orange after a drop in seismicity (meaning less magma is likely rising up into the volcano or the rate of eruption has dropped). But the ash cloud that topped out at ~11 kilometers (37,000 feet) high is still lingering over the Bering Sea and interior Alaska. Yesterday, the ash was significant enough to prompt Alaska Airlines to cancel 20 flights while PenAir ended up canceling most of their flights. Even with those cancellations, a passenger on an Alaska Airlines flight captured a great video of the erupting Pavlof.

Although current jet stream conditions could eventually bring dilute ash to the lower 48 states, it is unlikely that this brief eruption at Pavlof will cause much "travel chaos."

Meanwhile, ash was also falling on towns like Nelson Lagoon

, located over 120 kilometers (80 miles) northeast of Pavlof. Dave Schneider from AVO said this eruption was more energetic than any eruption at Pavlof

. The Himawari-8 weather satellite captured a great series of shots of the plume rising up over the cloud deck, sending a trail of ash to the northeast (see below). That plume was also captured in color by Terra's MODIS imager, showing how much the volcanic ash stands out against the cloud cover. There was also a clearly visible sulfur dioxide plume

from the eruption in the recent OMPS pass.

Himawari-8 loop from March 28, 2016 showing the plume from Alaska's Pavlof. Click on the image to see the loop.Dan Lindsey / NOAA Some new images of Pavlof

taken by the US Coast Guard since the eruption began to clearly show volcanic mudflows and possibly lava flows on the flanks of the volcano (see below). From the looks of the images, the eruption came from a vent just below the summit of the volcano.

Pavlof in Alaska, seen on March 28, 2016, with a strong ash plume and possible mudflows (lahars) on the slopes.Austin Torres / AVO - US Coast GuardSome other volcano updates:Chile Copahue has been more restless over the past week and the current eruption was captured by Jeff Williams

, one of the astronauts on the International Space Station (see below). The SERNAGEOMIN currently has Copahue at yellow alert status

as elevated seismicity and sulfur dioxide emissions (sometimes over 2000 tonnes/day) continue. The volcano has also been producing a nearly constant plume with incandescence noticed at night on the SERNAGEOMIN webcam

after the volcano produced another small explosive eruption. Alert status raised after another phreatic (steam-driven) explosion (see below). There is currently a 4-kilometer exclusion zone

around the volcano along with a no-fly order over the volcano. Kanlaon

produced a few small explosions last November and December but hasn't had a major eruptive period since 2006.