Aerogels Could Be Used to Build Terraforming Domes on Mars 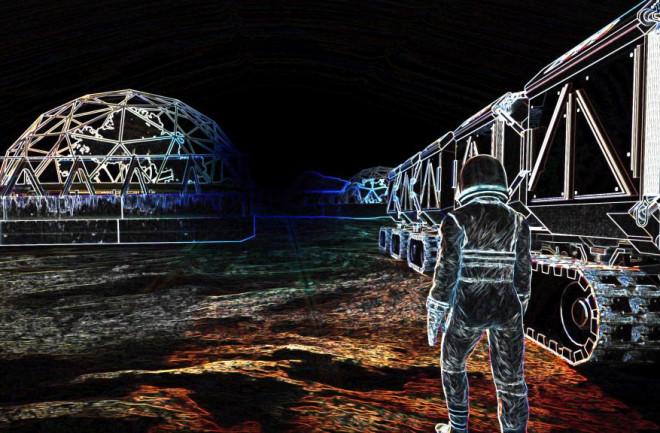 (Inside Science) — Shields made of a material so light it is sometimes called “frozen smoke” could help make areas on Mars livable, a new study suggests.

Currently, the surface of Mars is too cold for water to stay liquid, often thought of as a key prerequisite for life as we know it. Moreover, its atmosphere is too thin to shield against hostile ultraviolet radiation, which is dangerous to life.

Scientists have suggested a number of strategies to make the Red Planet more habitable, but all such terraforming projects are nigh impossible with current technologies. In one common scenario, humans would unleash the greenhouse gases locked away on the Martian surface to trap the sun’s heat. However, a 2018 study noted the only greenhouse gas abundant enough to significantly warm Mars is carbon dioxide, and not enough of it remains on the Red Planet to successfully terraform it. Another strategy involves redirecting comets and asteroids rich in greenhouse gases to hit Mars, but many thousands would be required.

“Those strategies are at best centuries away in the future,” said study lead author Robin Wordsworth, a planetary scientist at Harvard University.

Now Wordsworth and his colleagues suggest that aerogels, the lightest known solids, might help generate habitable spots on Mars. These incredibly porous materials are often made of as much as 99.8 percent air, earning aerogels the nickname of “frozen smoke.”

There are many ways aerogel shields could be used on Mars. “You can imagine putting down layers of tiles or flexible blankets on Mars and growing algae mats under them, or more standard dome-type structures to grow more traditional crops,” Wordsworth said. “The great thing about this approach is that it’s very flexible.”

“We could make habitable conditions on Mars within our lifetime, not centuries in the future,” Wordsworth said.

In experiments, the scientists replicated Martian surface conditions. They found a silica aerogel layer 2 to 3 centimeters thick could boost the temperature of the underlying surface by 50 degrees Celsius, to above the melting point of water. In addition, using a climate model of Mars, they showed that deploying a 2.5-centimeter-thick silica aerogel layer in icy regions in the planet’s temperate zones could help keep water liquid up to a depth of several meters through the Martian year.

The researchers noted that enough visible light can pass through the aerogel layer to allow for photosynthesis, and suggested aerogel shields could protect crops and other photosynthetic life with minimal subsequent intervention.

“Everything is expensive when it comes to sending missions to Mars, so if you are serious about creating habitable conditions there, you want to consider making the most of the incredible constraints on resources you have to face,” Wordsworth said.

“The characteristics of aerogel are pretty well understood in that it is an excellent, good insulator, so I think the results are very logical,” said planetary scientist Christopher Edwards at Northern Arizona University in Flagstaff, who did not take part in this research. “The main caution to the general public I would have about this work is the scale on which this could happen. Aerogels are not easy to make on a large scale, like those needed for this effort, and to accomplish the goal of creating a habitable region associated with subsurface ice on Mars, it would require a lot of aerogel.”

Wordsworth and his colleagues noted that humans are not the only species that manipulates silica — many plankton in the sea naturally do too. As such, they suggested genetically modified versions of such organisms might one day help create silica layers on Mars to help develop a new biosphere on the red planet.

The scientists did stress that if Mars still possesses life today, its survival or detection might get hampered by the presence of life from Earth. “We have to always be careful about putting life on Mars and with any exploration or terraforming projects there,” Wordsworth said. “The nice thing about the aerogel approach is that it’s localized — you can pick one area to study carefully first before implementing this strategy.”

The scientists now plan field tests with aerogel shields at places such as the Atacama Desert in Chile and the Antarctic Dry Valleys. “Those are the areas on Earth nearest to Mars-like conditions,” Wordsworth said.

Wordsworth and his colleagues detailed their findings online July 15 in the journal Nature Astronomy.