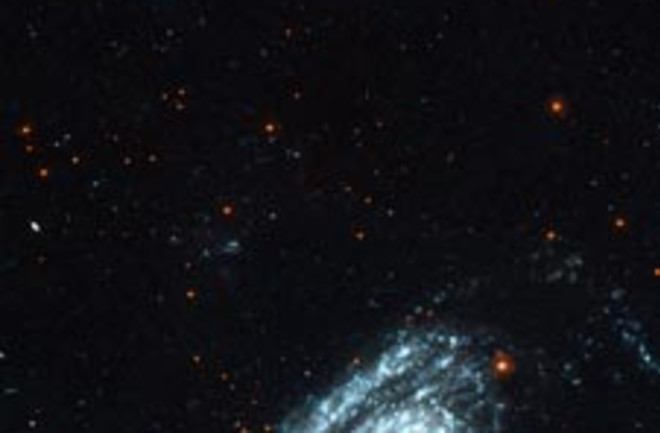 M81 and M82 are bright nearby galaxies; you can spot them with binoculars easily in the northern sky, and they are a mere 12 million light years from us (for comparison, the Milky Way Galaxy is 100,000 light years across, so if you think of the Milky Way as a DVD, M81 and M82 would be about 14 meters away). These two galaxies interacted a couple of hundred million years ago, and the gravitational interaction drew out long tendrils of gas (which is very common in colliding galaxies). Astronomers examined this bridge of material using Hubble, and found clusters of stars in it. That was totally unexpected; the gas was thought to be too thin to form stars! Amazingly, many of the stars are blue, indicating they are young (blue stars burn through their fuel much more quickly than redder stars. This means that the gas is still forming stars, even 200 million years after the collision! In the image below, almost all the stars you see are young blue stars formed in the aftermath of that titanic collision. The reddish stars are stars in our galaxy, and the bigger objects are distant background galaxies.

Most likely, the stars formed when turbulence in the tendril caused local regions of denser gas, which could collapse to form stars. Before these observations, it wasn't really thought it was possible to form stars in the regions between galaxies, so this is an interesting new find.