A Sun's Eye View of the Solar System

If you could stand on the Sun and look out at Earth and the other planets, what would it look like? 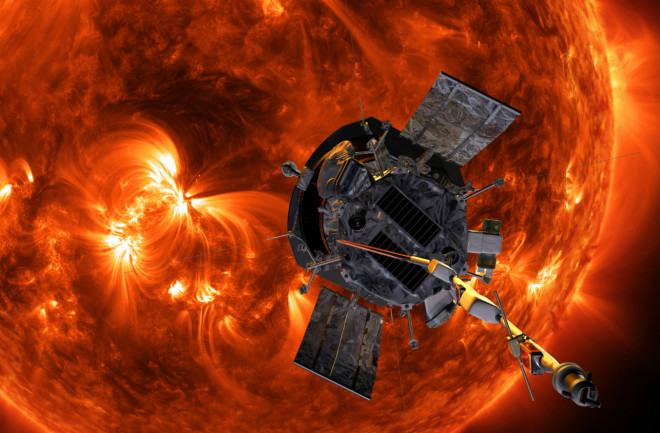 An artist’s concept of the Parker Solar Probe spacecraft near the sun. The probe — which has swooped closer to the Sun's surface than any previous spacecraft — is providing new data on solar activity and helping scientists forecast major space-weather events that impact life on Earth. (Credit: NASA)

As the Parker Solar Probe spacecraft swoops breathtakingly close to the Sun, it is subjected to temperatures of nearly 2,500 degrees Fahrenheit.

The probe was built to withstand these unimaginably harsh conditions so its intruments could send home valuable information about a host of solar phenomena that affect us here on Earth. These include gargantuan explosions of energy and plasma, as well as the solar wind — billions of tons of charged particles that blow past Earth at a million miles per hour.

By getting so incredibly close to the Sun, NASA's Parker Solar Probe is able to provide valuable new information about these phenomena, which can agitate Earth's magnetic field, triggering serious disruptions to satellites, communications networks, and power systems.

And there's another benefit: The probe's wide-field imaging instrument can offer us a completely unique view — and I'm not just talking about the Sun itself.

“Imagine being able to stand on the Sun and gaze toward the stars,” said Nour Raouafi, Parker Solar Probe project scientist, quoted in a NASA release.

From a perspective very close to the Sun, the Parker Solar Probe saw most of the solar system’s planets on June 7, 2020. It recorded this view of the scene, which consists of a pair of images stitched together. The probe is just to the right of the Sun and looking beyond it to the planets. (Credit: NASA)

The view above gives us a sense of what that would like look it. The probe acquired the two stitched-together-images as it swooped to within 11.6 million miles of the Sun's surface on June 7, 2020. Six planets are in the field of view: Mercury, Venus, Earth, Mars, Jupiter and Saturn.

From the composite image alone, it may be a little difficult to picture the probe's location relative to the Sun and the planets. This diagram might help:

The Parker Solar Probe’s position and view of the solar system when it took the “six planet” image on June 7, 2020. (Credit: NASA/Johns Hopkins APL/Yanping Guo)

On its orbit, shown by the green loops in the overall diagram, the spacecraft is just to the right of the Sun. As seen in the inset, the probe's heat shield is pointing toward the Sun. And its wide-field imaging instrument, which consists of inner and outer telescopes, is gazing out into the solar system. The slightly brighter region between the fields of view shows where the views of the two telescopes overlap. For a larger version of the diagram, click here.

“It’s just awe-inspiring to see so many worlds in our solar system – including our own planet – in the same portrait," Raouafi said. "We often think of viewing ou​r solar system from the outside in, [but] this allows us the unique opportunity to see it from the inside out. It’s a view few spacecraft can provide, and the Parker Solar Probe has given us an entirely different perspective on our place in space.”

The View From Another Angle

The Parker Space Probe wasn't the only solar-observing spacecraft to capture a unique view of Earth and other denizens of the solar system last year. The Solar Orbiter, a collaboration between the European Space Agency (ESA) and NASA, offered a different — but no less arresting — perspective:

When the spacecraft captured the images that make up this animation on Nov. 18, 2020, it was looking towards home across 155.7 million miles of space. In addition to our home planet, Venus and Mars were seen together, with the Sun located on the right, outside the image frame. (To understand the perspective, this artist's rendition might help. Just be aware that Mercury is included even though it is not visible in the animation.)

Uranus also was visible. In the animation, it's just one of a number of tiny specks at the bottom of the frame. But NASA wasn't actually aware of of the planet's presence when it originally published the animation. Citizen scientists alerted the agency to it.

You can see a still version of the scene with Uranus labelled here.

The Solar Orbiter may have been far from the Sun when it captured this view, but like the Parker Solar Probe, it is also designed to swoop in and study our star from closer than previous spacecraft. The two missions compliment one another. As NASA explains:

"Working together, Solar Orbiter's comprehensive suite of instruments and NASA’s Parker Solar Probe's up-close view of the Sun provide a never-before-seen global view of our star.  Various conjunctions of the two missions over their life spans allow observations along different points of the same magnetic field lines and outflow of material, or allow one mission to provide a larger context view of the space the other one is traveling through."

The Solar Orbiter was launched last February, and since then has returned the closest-ever view of the Sun. It is also designed to do something no other spacecraft has ever done: return images of the Sun's poles.

Every 11 years, the Sun's magnetic field flips, with the north pole becoming south, and visa versa. Before this happens, solar activity swells, with the number of flares and giant eruptions (called coronal mass ejections) increasing. Scientists suspect that by providing new information about what's happening at the poles, the Solar Orbiter will provide vital insights for undestanding what actually drives the 11-year-cycle of solar activity.