A Russian Volcano Just Erupted for the First Time in Centuries 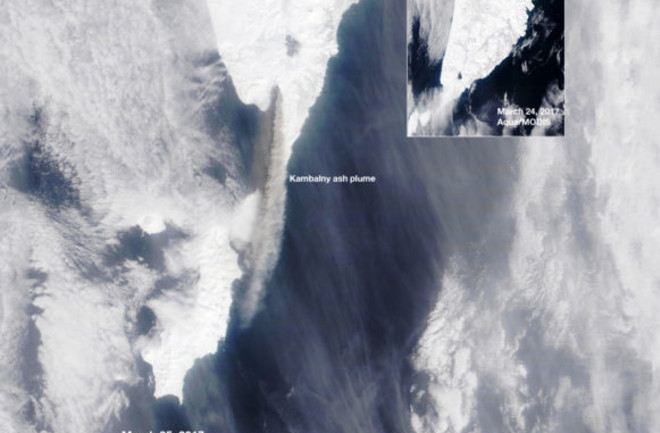 The ash plume from Kambalny on March 25, 2017. The inset image shows the region the day before, with no plume from the volcano and no evidence of ash.NASA, Annotated by Erik KlemettiThis weekend saw a new eruption from Kambalny in southern Kamchatka. Now, the Kamchatka Peninsula is a very volcanically active area, with multiple eruptions going on simultaneously much of the time. There are certain volcanoes that are in almost-constant unrest, like Shiveluch, Kliuchevskoi, and Karymsky. However, Kambalny is not one of the usual suspects for activity. This changed when a dark grey ash plume was spotted by Earth-observing satellites on March 25. The plume (see above) stretched hundreds of kilometers to the south over the Pacific Ocean and may have reached as high as 8 kilometers (26,000 feet) above sea level. Be sure to check out the NASA Earth Observatory image of the eruption that clearly shows the plume and its shadow. Video taken of the eruption from the ground shows a billowing plume coming from the volcano's summit. An image taken on March 27 (see below) shows a dark grey layer of ash covering much of the southern tip of Kamchatka and a much weaker plume that is lighter in color. This might suggest the eruption is now much more steam than ash in its column.

The area around Kambalny on March 27, 2017. Dark grey ash is clearly seen covering the snow in the southern part of the Kamchatka Peninsula. The ash plume is much weaker and lighter.NASA/Aqua/MODIS, Annotated by Erik Klemetti This eruption was a surprise to the volcanologists that monitor the Kamchatka Peninsula. However, surprises are easy when many of the dozens of volcanoes on the peninsula are far from most people (only ~4,500 people live within 100 kilometers of Kambalny) and most lack any sort of real-time, local monitoring such as seismometers or webcams. This means many of the more subtle signs of an impending eruption, like earthquake swarms, increasing steam-and-gas emissions, or deformation might go unnoticed. This appears to be the case at Kambalny. At this point, we don't know if this eruption released any new magma or if it is just an explosion that erupted old, cold material in the vent area of the volcano. If it is new magma, we might expect more explosions, much like what we've seen over the last few months at Alaska's Bogoslof. If it is merely cold rock that was shattered during a large, steam-driven explosion, this could be a one-off event or the opening stages of more explosive eruptions if magma is rising into Kambalny. Kambalny's eruptive history is, to say it best, fuzzy. There was a report of an eruption in 1767, but this isn't confirmed. That's exactly 250 years ago and could be the minimum estimate for the last time Kambalny saw activity. The biggest source of uncertainty is that lots of small eruptions could have easily been missed since then---at least until we launched satellites to watch the planet. The last large eruption of the volcano might have occurred as long ago as ~1350. However, Kambalny bears watching as its eruptive history is filled with explosive eruptions and large avalanches. Some small, young-looking cinder cones have also grown on the slopes of Kambalny, which means they haven't been destroyed by weathering on the peninsula. The take home message here is that Kambalny has the potential to produce some big eruptions, but we just don't know too much about its behavior. Currently, KVERT has Kambalny on Orange alert status. Although the volcano isn't a threat to many people near the volcano (because there just aren't many anyway), it is a threat to aviation. Some early weather satellite images of the eruption showed contrails from aircraft over the plume material (note: the aircraft are likely ~10,000 feet above the plume) as it drifted out over the Pacific Ocean, which could be bad news if the eruption had gotten more intense and ash reached higher into the atmosphere. Carefully watching these eruptions will help keep people and aircraft safe as they transit the Pacific rim.